In  a last ditch effort to persuade the undecided, Brett Kavanaugh penned an op-ed akin to a defensive grovel in the Wall Street Journal, hoping that he will be confirmed by the U.S. Senate, as a Justice to the Supreme Court. 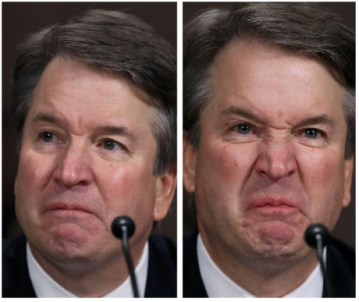 Clearly aimed at that teeny audience of three who are the possible swing votes, Kavanaugh is hoping for Senators Collins, Flake and Murkowski to read what is akin to his closing argument.

First, allow me to reflect on my credentials. For the past 30 years I have been mediating divorce cases,  assessing dynamics, steering cordiality, guiding people to settlement, and so acquiring a deep understanding of what makes people tick! My experience has given me a wisdom and depth of insight that I feel comfortable bragging about.  Additionally, as a country conditions expert for asylum seekers, providing testimony in court, I hear stories, some seemingly outrageous and far fetched. I have developed a keen talent where I can now discern between the credible and the lie.   I have a strong sense of what is reliable. I read affidavits and assess stories and my senses are sharp – sharp, sharp, sharp!

So lets talk Kavanaugh: Admittedly I believed Dr. Christine Blasey Ford, the moment I heard her story.  I knew Kavanaugh was lying.  And all this was confirmed for me when they both testified. There is no doubt in my mind that Kavanaugh is lying. Not even one iota of doubt. I believe Dr. Blasey Ford 100%.

So now, faced with Kavanaugh’s WSJ ‘closing argument’ in the form of his op-ed of today – here are the confirming pointers to indicate he is lying:

Kavanaugh: At times, my testimony—both in my opening statement and in response to questions—reflected my overwhelming frustration at being wrongly accused, without corroboration, of horrible conduct completely contrary to my record and character. My statement and answers also reflected my deep distress at the unfairness of how this allegation has been handled.

My Note: The words “without corroboration” would ONLY have been penned by a guilty man! Think about it……! Take out those two words and re-read the sentence – the latter would be more akin  to the comment of an innocent man. A DEAD give away! If you are innocent corroboration does not exist and hence you do not need to mention it. It is a given. This is indicative of Kavanaugh in defensive mode. Guilty!!!!

Kavanaugh:  “I was very emotional last Thursday, more so than I have ever been,” Kavanaugh writes in the Journal. “I might have been too emotional at times. I know that my tone was sharp, and I said a few things I should not have said. I hope everyone can understand that I was there as a son, husband and dad. I testified with five people foremost in my mind: my mom, my dad, my wife, and most of all my daughters.”

Yet he fails to retract the actual lies. The focus is Kavanaugh deflecting to himself as the paterfamilias, that excruciating Roman law concept, steeped in paternalistic dominating legal principle that places daddy-husband at the head of the family with a right to use HIS family as HIS excuse. And if not lies – then he really did mean his conspiracy theory,  that this was all at the behest of Democrats who conspired with Clinton’s revenge at its helm.  He does not apologize for what he actually said.  He does not retract it. He is not remorseful because he is lying. Its one thing to try and wiggle out of the emotionality but he makes no attempt to speak to the verbiage itself – THAT which he said. Well he must have been saying what he meant. Emotionality flies out of the window. He is only willing to cop to tone!

Kavanaugh: “The Supreme Court must never be viewed as a partisan institution.  The justices do not sit on opposite sides of an aisle. They do not caucus in separate rooms.”

Yet he has not apologized for creating a divisive partisan atmosphere through his own statements in that hearing room. He made SCOTUS partisan by his statement. Well, he made it partisan only IF he is confirmed. If not – we may be saving the institution from an overt type partisanship, the likes of which we have never seen before.

When all is said and done – it boils down to what the attorney for Dr.  Blasey Ford told CNN’s Anderson Cooper, about the op-ed:

“This op-ed in no way removes the issue of temperament,”

“That testimony was written, carefully prepared, planned, premeditated — not some emotional outburst,” Blumenthal told CNN. “Judges are supposed to put emotions aside.”

Exactly – the ultimate lie – this very op-ed!  What does Kavanaugh think we are all red hatted #MAGA rally fools?  This op-ed should seal his fate to a NO VOTE! Senators Collins, Flake and Murkowski may you please be subscribing to the same G-d as me!

READ MY ARTICLE in response to the hearing where he showed Testimony is Conduct Unbecoming for ANY Judicial Job. HERE.

5 thoughts on “How Kavanaugh’s Latest Op-Ed proves he IS Lying and Unfit.”