Local Churches ought to Defy Anglican leaders over Gay Ban 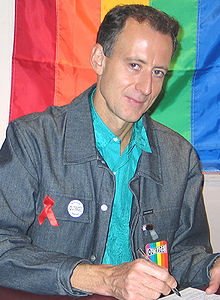 Total ban on Civil Partnerships is “autocratic and homophobic”   Some Anglicans want to host civil partnerships, the church says no…

“I urge individual priests and their congregations to defy this harsh, intolerant ruling. They should go ahead with same-sex civil partnerships, if they want to. This autocratic decision should be defied. It doesn’t deserve respect or compliance,” said human rights campaigner Peter Tatchell, coordinator of the Equal Love campaign and Director of the Peter Tatchell Foundation.

He was commenting on a warning by the Church of England hierarchy that same-sex civil partnerships will be banned in Anglican churches – even after the new regulation comes into effect today, Monday 5 December, allowing religious organisations to conduct civil partnership ceremonies on their premises if they wish to do so.

“Many grassroots Anglicans reject this homophobic ruling by the church leadership. They support hosting same-sex civil partnerships in religious premises. The Church of England top brass is out of touch,” added.

“The Anglican leadership has said the ban will apply unless permission is granted by the General Synod. Given that permission is inconceivable for the foreseeable future, this is an effective total ban.

The Equal Love campaign is working to overturn the UK’s twin legal bans against same-sex civil marriages and opposite-sex civil partnerships. It currently has a legal case in the European Court of Human Rights. See here:

You can also read the Equal Love critique of the government’s proposals on same-sex marriage, which fall short of equality and will maintain discrimination against both gay and straight couples:

Peter Gary Tatchell (born 25 January 1952) is an Australian-born British political campaigner best known for his work with LGBT social movements. He attracted international attention when he attempted a citizen’s arrest of Zimbabwean President Robert Mugabe in 1999 and again in 2001.

Tatchell was selected as Labour Party Parliamentary candidate for Bermondsey in 1981, and was then denounced by party leader Michael Foot for supporting extra-parliamentary action against the Thatcher government; though the Labour Party subsequently allowed his selection, when he ran in the Bermondsey by-election in February 1983. In the 1990s, he became a prominent LGBT campaigner through the direct action group OutRage!, which he co-founded. He has worked on a wide variety of issues, such as Stop Murder Music, which campaigns against music lyrics that incite violence against LGBT people, and is a frequent contributor on human rights and social justice issues in print and through broadcast media, authoring many articles and six books. In 2006, New Statesman readers voted him sixth on their list of “Heroes of our time”.

In April 2007 he became the Green Party of England and Wales prospective parliamentary candidate in the constituency of Oxford East.[3][4][5][6][dead link] However, in December 2009 Tatchell announced he was standing down from the post due to brain damage he says was sustained from injuries by President Mugabe’s bodyguards when Tatchell was trying to arrest him for the second time, and by neo-Nazis in Moscow while campaigning for gay rights, as well as from an accident on a bus.[7][8][9] The Green Party candidate who replaced him in the general election five months later secured 1,238 votes against the successful (Labour Party) candidate’s 21,938 votes.

He is a regular contributor to The Guardian’s online opinion section, Comment is Free.

Since 2009, he has been an Ambassador for the penal reform group, Make Justice Work.

One thought on “WRITERS | GUEST ACTIVISTS”