Two days ago, Uganda’s dictator, President Yoweri Museveni, who has been in office for over 34 years, declared himself to be the winner for a sixth term in last week’s highly contested Presidential election in Uganda. Many believe the election was rigged and won by contender, Parliamentarian Hon. Robert Kyagulanyi, aka Bobi Wine, a singer popular among Uganda’s youth. Soldiers and police were out in force in the capital of Kampala on Saturday. In an interview with NPR, Wine said security forces were not allowing anyone in or out of his home, apparently under some form of House Arrest, as military and soldiers surrounded his home. The U.S. Ambassador was denied entry when she tried to visit Hon. Kyagulanyi.

The nation’s electoral commission announced on Saturday that Museveni received 58% of the vote to 34% for Wine, according to The Associated Press. But Wine is alleging that the vote was rigged, as election officials face questions over how results were tallied amid an Internet blackout, according to the AP. Ahead of Thursday’s election, Museveni’s government shut down social media outlets — including Facebook, Instagram and Twitter— in Uganda. It also sent military vehicles into the streets.

I have reported many instances of intimidation, arbitrary  arrests, beatings and other oppressive means by Museveni in his attempts to thwart opposition. Even if it were true that Bobi Wine received 34% , it would construe a feat, considering just how much persecution by Yoweri’s government, he had been subjected to during his campaign. See Below.

The U.S. Ambassador to Uganda, Natalie E. Brown attempted to visit Bobi Wine at his residence today, but was denied access by Ugandan security forces.

The Embassy noted the following in a strong statement:

“The United States regularly meets with actors across Uganda’s political spectrum as part of its diplomatic engagement.  The purpose of Ambassador Brown’s visit was to check on Mr. Kyagulanyi’s health and safety, given that he’s effectively been unable to leave his home, with security forces surrounding his residence. Uganda’s election campaigns were marred by the harassment of opposition candidates, campaign staff, and supporters; suppression of the media and civil society organization activities; and a nationwide internet shutdown before, during, and after voting day.
These unlawful actions and the effective house arrest of a presidential candidate continue a worrying trend on the course of Uganda’s democracy.
We call on the Ugandan government to respect their citizens’ human rights and fundamental freedoms, including the freedom of expression, freedom of assembly and freedom of the press as provided for in Uganda’s own constitution and according to commitments Uganda has made to uphold international human rights standards.
Nobody should be unlawfully denied a means to communicate and the freedom to leave their home, should they choose to do so.”

There is ample evidence reflecting a rigged election, cheating and suppression that occurred during and prior to the election. 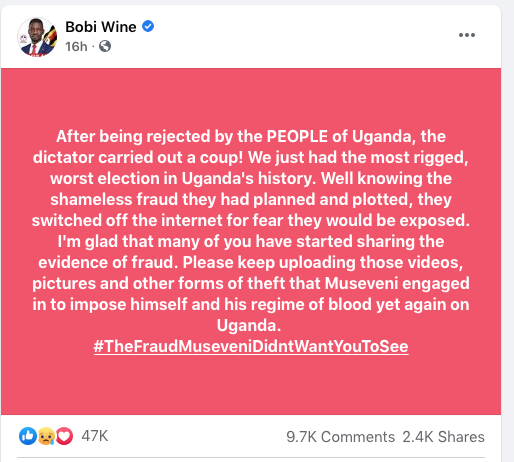 Through my work at African Human Rights Coalition, I am calling on the new President to the United States, Joe Biden (to be inaugurated Jan 20th) to immediately take actions against Uganda – to call for: the immediate release of Bobi Wine from unlawful detention,  a recount of ballots, and an international commission to fully investigate the election campaigns and process. Other repercussions must be considered after full investigation. 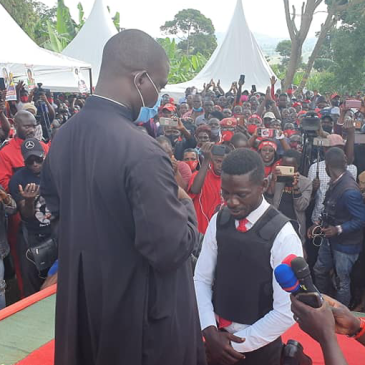 On Nov 03, Robert KYAGULANYI, aka Bobi Wine (singing name), the Ugandan member of Parliament, campaigning to be the next Ugandan President by opposing yet another term by the 30 year dictator Yoweri Museveni  delivered this speech to the Ugandan people: National Unity Platform November 3 at 7:06 PM  ·  *PRESIDENT KYAGULANYI SSENTAMU’S NOMINATION SPEECH* Fellow Ugandans, I bring you … END_OF_DOCUMENT_TOKEN_TO_BE_REPLACED

In the middle of the night, my friend, Hon. Nabilah Naggayi Ssempala, uploaded a video to her Facebook, with the caption “I am being hounded out” – soon after that – it became apparent that she had been seized and detained in what appears clearly to be a violent unlawful arrest and taken to an unknown … END_OF_DOCUMENT_TOKEN_TO_BE_REPLACED