TWO men who were caught having sex at a lodge in Kapiri Mposhi in 2017 have been sentenced by the High Court in Lusaka, Zambia to 15 years imprisonment.
Japhet Chataba, 28, a carpenter of Ndeke Township, and Steven Samba, of Kasenshi in Kapiri Mposhi. The Judge ruled that the men had committed an “act against the order of nature” – which is how the old British Penal Code defines consensual same-sex love-making. 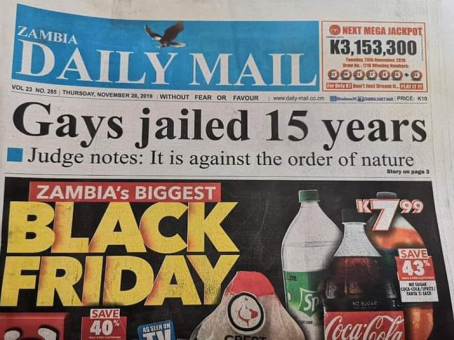 While the men were in the room, one of the workers peeped through an open window and saw them having sex. The worker then alerted her colleagues whom she invited to the window to catch a glimpse of two men. The two men were convicted last year by the Kapiri Mposhi Magistrates’ Court but they took the case to the high court. But high court judge Charles Zulu refused to review the verdict of the lower court and handed down the 15-year sentence.

“The trial court cannot be faulted and there is no basis to review or substitute the conviction and I further find that there were no irregularities by the trial court,” Judge Zulu said, the state-owned Zambia Daily Mail newspaper quotes him as saying.

Judge Zulu said he was satisfied that the lower court had been within the confines of the law when it convicted the defendants.

The US ambassador to Zambia has condemned the 15-year jail sentence handed down to two men, in what is clearly a robust condemnation of the hypocrisy:

Ambassador Daniel Foote accused the authorities of having double standards when it comes to pursuing other crimes, noting “I was personally horrified to read about the sentencing of two men, who had a consensual relationship, which hurt absolutely no-one,” he wrote in a statement.

“Meanwhile, government officials can steal millions of public dollars without prosecution, political cadres can beat innocent citizens for expressing their opinions with no consequences, or poachers/traffickers can kill numerous elephants, barbarically chainsaw and sell their tusks, and face a maximum of only five years imprisonment in Zambia.”

The ambassador said decisions like “this oppressive sentencing do untold damage to Zambia’s international reputation by demonstrating that human rights in Zambia is not a universal guarantee”.

“They perpetuate persecution against disenfranchised groups and minorities, such as people from other tribes or political affiliations, albinos, the disabled, our lesbian, gay, bisexual, transgender, and intersex brothers and sisters, and anyone who is deemed ‘different’.”

Mr Foote said gay individuals continued to make exceptional contributions to society in the US and elsewhere as politicians, artists, ambassadors, business leaders, philanthropists, and friends.

“Perhaps, it’s time for Zambia to consider its outdated stance and obsolete legislation on how to treat the LGBTI community, and all others considered ‘different’,” he concluded.

The arrests, legal trajectory and current ruling are absolutely horrific. We at African HRC condemn this unjust sentence and call for the immediate decriminalization of same-sex relations and what is clearly natural innate human sexuality.

The greater hypocrisy prevails when Presidents conveniently lose sight of truth: Zambia’s President Edgar Lungu has spoken out against LGBTI rights, noting he would not impose them on Zambians in exchange for donor aid. Mr Lungu has said that certain rights that are enjoyed in other parts of the world may not be accepted by Zambians.

What the President conveniently forgets, in a climate where gays are convenient scapegoats for politicians such as himself, is that it is in fact the Colonialists who usurped Zambian law and culture.  Zambian and African cultures did not give a hoot about homosexuality and same-sex relations until the white man conquered and imposed their religions and laws.

The world should be outraged by this and while generally I am not one to call for cuts to AID, fearing further repercussions and backlash against LGBTI communities, in this instance there ought to be some consideration and discussion around the issue.