When government officials in a place like Uganda, or anywhere for that matter, accuse Gay people of having an agenda as terrorists, they must be held responsible for the violence that will follow. Sadly a member of Uganda’s gay community was hacked in a brutal assault by ahomophobic straight person, using a hoe to his head, and the young gay man did not survive his injuries.

Ugandans have confirmed that the attack on 24 year old Wasswa, John (Brian) was motivated by homophobia.

Just yesterday the Minister of Security in Uganda, Minister Elly Tumwine, said on National TV,  NBSTV that LGBTI in Uganda is the agenda of a global terrorist cabal.  See screenshot: 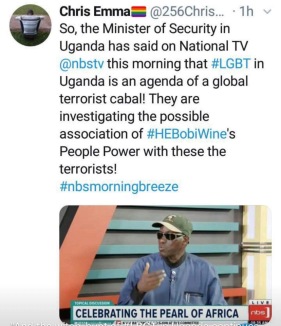 After this occurred on National TV several Ugandan LGBTI contacted African HRC expressing fear as a result of the scapegoating attack by the Minister. While we cannot link the death of Wasswa to these comments, the timing is surely subject to scrutiny. 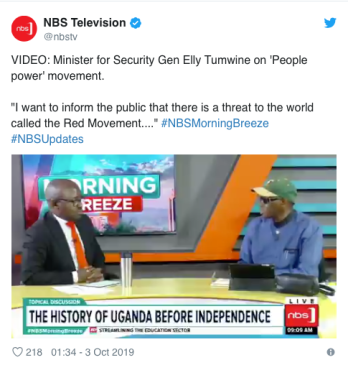 Uganda criminalizes LGBTI people under the old Colonial Penal Codes. The 2014 Anti-Homosexuality Act, otherwise known as the “Kill the Gays Bill”, signed into Law by President Yoweri Museveni, was held to be invalid by the Ugandan Courts based on the technicality that Parliament failed to have a quorum at the time of passage. The Bill was a popular Bill among Ugandan Parliamentarians. Some have sought to bring it back. At this time many Uganda LGBTI people have fled to neighboring country Kenya to seek resettlement abroad due to the persecution of gays and lesbians and trans people in Uganda.

We at African HRC extend our deepest sympathies to members of the LGBTI community in Uganda and the family and friends of Mr. Wasswa. May he rest peacefully. May his perpetrator be brought to justice. We urge people to be cautious and do all they can to remain safe. However is is up to Government to protect all people in their country.  I urge the Ugandan government to refrain from such hateful lies such as that displayed by Minister Tumwine this week. This can and may well have lead to this murderous violence.  I urge the Ugandan Government to come out publicly against people attacking LGBTI people, who are citizens deserving, as anyone else, of their basic civil and human rights. The Ugandan Government must bring the perpetrator of Mr. Wasswa’s murder to justice. The Ugandan Government must speak out against vengeance perpetrated toward gays. The Ugandan Government must stop scapegoating and lying about LGBTI people. Until this is fixed, President Museveni and his cabinet and Parliamentary members have this young man’s blood on their hands. Melanie Nathan, ED African HRC.