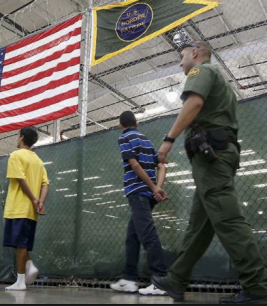 Every day brings more examples of the culture of impunity and dehumanizing cruelty that defines CBP (Customs and Border Protection) and our entire immigration enforcement system. Trump, who has called the reports about horrific conditions for migrants, asylum-seekers and children in government care a “hoax”, has encouraged and defended these practices. Little wonder that the volume of horrific reports detailing new and disturbing revelations continue.
The latest comes in the form of an NBC News report, “Migrant kids in overcrowded Arizona border station allege sex assault, retaliation from U.S. agents,” which notes:

“The poor treatment of migrant children at the hands of U.S. border agents in recent months extends beyond Texas to include allegations of sexual assault and retaliation for protests, according to dozens of accounts by children held in Arizona collected by government case managers and obtained by NBC News.
…A 15-year-old girl from Honduras described a large, bearded officer putting his hands inside her bra, pulling down her underwear and groping her as part of what was meant to be a routine pat down in front of other immigrants and officers. The girl said ‘she felt embarrassed as the officer was speaking in English to other officers and laughing’ during the entire process, according to a report of her account.”

The conditions cannot be blamed purely on overcrowding, per the NBC report. Instead, they are evidence of a dehumanizing cruelty, retaliation against those who complain and the culture of impunity that needs reform and accountability:

…in nearly 30 accounts … kids who spent time in the Yuma border station repeatedly described poor conditions that are not pure byproducts of overcrowding. They reported being denied a phone call, not being offered a shower, sleeping on concrete or outside with only a Mylar blanket, and feeling hungry before their 9 p.m. dinnertime.”

The disturbing NBC report comes on the heels of several other investigative pieces, including: a joint investigative article by the New York Times and the El Paso Times, “Hungry, Scared and Sick: Inside the Migrant Detention Center in Clint, Tex,” detailing the horrifying conditions for children and the spread of disease inside the Clint facility for children; CNN’s report that Border Patrol agents tried to shame a migrant being held at a processing center in Texas by making the migrant hold a sign reading “I like men” – a detail reminiscent of the human rights violations inflicted against prisoners held at the infamous Abu Ghraib prison in Iraq. And multiple reports from the DHS Inspector General (IG) — the internal government watchdog for DHS — shows that the pattern and practice of horrific conditions for children and adults in immigration detention has long been known by the Trump administration.
Nonetheless, Trump calls the reports about the Clint facility a “hoax” and Acting DHS Secretary Kevin McAleenan continues his pattern of lying by falsely asserting that detention facilities are being run professionally, that reports of horrible conditions are unsubstantiated, and it’s all the fault of the Democrats.
According to Douglas Rivlin, Director of Communication for America’s Voice:

“CBP, along with ICE, have a culture of impunity and we are witnessing the consequences in the stories being told by children who are being abused. Cruelty at the micro level of individual officers treating individual detainees abusively is reflective of the cruelty that starts at the top, in the White House and at DHS and CBP HQ. Let’s be clear, the revelations follow a consistent and disturbing theme that has more to do with dehumanizing cruelty than it does with a lack of resources or overcrowded conditions. Daily headlines of our government behaving atrociously and inhumanely towards children and families takes its toll on our national reputation as a defender of human rights. It’s hard to lecture Iran, North Korea or China on human rights abuses when reports of American abuses are blasted worldwide on a daily basis. A series of upcoming Capitol Hill hearings are sure to uncover more damning evidence for why these American agencies and this administration need real oversight and real accountability and why any vision for broader immigration reform must include serious plans to overhaul our immigration detention procedures and infrastructure.”