I am a Jew, known for my global human rights work and always publicly open about my support for my people’s right to self determination. Since the first Women’s March I have never felt unloved, unwelcome, abandoned or unsafe in my marching or relationship with Women’s March, San Francisco (WMSF)! In fact organizers have reached out to me, always willing ears, and included me in leadership and visible roles for what I have to say and offer. Never once did I feel tokenized. I knew I was fully included. I have felt cherished and respected. I have felt wanted and loved. Since its very start. Of course I will be marching on January 19, 2019. For me it has never been a question.

When invited to speak on a panel at the JCC for Women’s March in 2017, I did not hesitate, and sat on a stage next to other San Francisco leaders. (See Picture.) When I  marched at the fore in the 2018 rally protesting “Separation of Families,” one of four holding the Women’s March banner, I felt treasured. And now being asked to participate with my sisters in carrying the front banner at Saturday’s January 19th march, I feel proud and honored.

Through these few years since Woman’s March San Francisco’s beginnings, I have been ever present, observing full inclusion, and the embrace of all intersections. At no time have I personally ever witnessed anti-Semitism or felt afraid for my safety as a Jew.  WMSF had been detrimentally impacted and grilled because of the statements of a few women in leadership roles with Women’s March Inc. While I cannot minimize the anti-Semitism, I always knew WMSF was independent of WM Inc., and even if it was not, I would still not have allowed, while speaking out, any of this anti-Semitic remarks to alienate me from Women’s March, which to me represents a movement and not an organization. My stance has been cemented and unwavering because of what the movement represents and the clear mission.  It has also been BECAUSE of antisemitism and in spite of it that I wanted to ensure I participate fully, with all my intersections at the fore, and especially helmed by Jewish and lesbian identity. To my way of thinking running from my sisters, because of the sentiment of some usurping leadership, made no sense. To me those people were organizers – not my leaders. 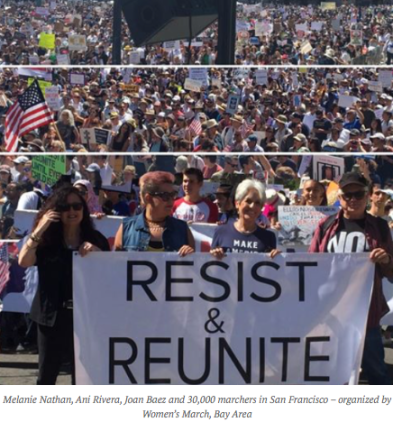 I have spent months on social media expressing my stance – validating the hurt and pain of fellow Jews at the statements of a handful of women who demonstrated anti-Semitism. At the same time I have had to balance my continued support for Women’s March as an emerging movement which organically grew its many local independent offshoots, all of crucial importance to the  commonality of issues for all women in America at this time.

Even before the WM Inc. leadership tried to wriggle out of their words and the perceptions, I chose not to judge the extent of what was in their hearts. That does not mean I do not abhor it and it does not mean that I do not speak out against it.  I also chose not to allow “men”, their influence on perhaps at times ‘weaker’ women, and what they may have said or done in the past, to be the arbiters of my inclusion in this women’s march movement. I chose not to give the likes of any LF any power. As a lesbian and Jew I do not give the likes of a DD any power.   I do not give any anti-Semite any power – male or female – to exclude me. I saw walking away from the Women’s March as a huge mistake and defeatist.  Even from Inc.! It is my belief that by staring these so called leaders in the eye, it is that which would result in resignations or stepping down, rather than us making demands for such or walking away. Showing up strengthens our stance against anti-Semitism, in my opinion. It in no way endorses it. It defies it! Again, this does not mean that I will not speak out against antisemitism or rebuke those who fuel it. However it will not alienate me from my sisters. I believe we all have equal leadership roles, and that those putting on this march, no matter where, are not my leaders, but mere organizers providing a platform for everyone to participate for common goals.

Today, Jewish Community Relations Council sent out this advisory, which may make it easier for those who have been on the fence or alienated to now participate:

“Since JCRC published the Update on Anti-Semitism in the Women’s March we have received many messages of solidarity and thanks from general Women’s March supporters as well as from the organizers of local Women’s Marches. This week, alongside a small group of Jewish women leaders, JCRC Executive Director Abby Porth participated in a meeting set up by JCCSF CEO Marci Glazer with the Women’s March San Francisco organizers. It was a very productive session and they were eager to hear and address Jewish community concerns.

Yesterday, Women’s March San Francisco issued an “An Open Letter to the Jewish Community of San Francisco,” which included this critical highlight: “When Rabbi Noa Kushner mentioned that a family at The Kitchen doesn’t feel safe sending their kids out in kippot, we knew we owe a frank and clear assertion of the values of Women’s March San Francisco. Ensuring your families feel safe in the space and movement we’re building is table stakes, we want to you to know you’re a treasured and essential part of the coalition.”

JCRC has received similar expressions of concern from the organizers of Women’s March San Jose, who sent a message saying, “Women’s March San Jose condemns anti-Semitism and hate of all kind, and we are truly troubled by the pain caused to our Jewish sisters.” They also shared their public statement calling out anti-Semitism as unacceptable and stating unequivocal support for values of diversity, equity and inclusion. (Note that the San Jose and San Francisco groups share unity principles, which are explicitly inclusive of Jewish women.)

Women’s March Petaluma also contacted us last week to make sure that we knew the national group did not speak for them. The unity statement that Petaluma organizers shared with us states: “We recognize that controversy around anti-Semitism at the National level arose after the first march in 2017 and are aware that these issues around prejudice, racism, and stereotypes are again in the news…. The spirit and mission of the Women’s March Petaluma is to lift up the voices of ALL women, and we are working independently to create an event that is our own.”

There is a lot at stake in our nation. From racial inequity to economic insecurity, from dangerous xenophobia to the marginalizing of various groups, there are so many reasons for the Jewish community to participate. The safety of Jews of color, the safety of the Jewish community in general, and the security of all Americans calls us to join with others to voice our commitment to address these social ills. The choice to march is a personal one, but we encourage Jews who do to proudly express their Jewish identity and heritage.”

And with all this said, I want to thank Women’s March San Francisco for hearing and not giving up during the storm. I express my gratitude that WMSF faced the surge of criticism head-on, not only through addressing concerns of the Jewish communities, but also by providing the adjustments and reassurances needed to correct any untoward perceptions. It may’ve seemed easy to ‘toss hands in air’ refusing to deal with what came down as a result of the complex associations or perceptions of such.  Instead the organizers of WMSF went above and beyond a mere weathering of the storm, all the while unpaid volunteers, dedicated to the mission at hand, essential to which are all voices in common union. I am thankful.

AND all this distressing and tiring, yet they persisted in their commitment to ensure this crucial event heads toward success, even when funds fall terrifyingly short.

It is with this that I am asking all my friends to join in, fully committed to why we are marching. Visit the Website of Women’s March San Francisco and contribute in any way you can- through your physical participation, proud support and financial contributions.  See you on the street! 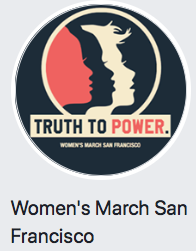