San Rafael, CA – Starting January 1, 2020, specialty tobacco stores in unincorporated Marin County will be prohibited from selling flavored tobacco products, including vaping liquids and menthol cigarettes. For all other retailers and individuals, the ban goes into effect July 1, 2019. 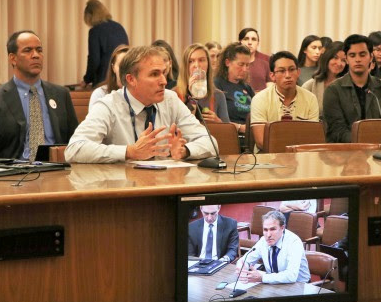 With support from its Department of Health and Human Services (HHS) staff, the Marin County Board of Supervisors voted November 6 to add a chapter to the Marin County Code with the restriction on tobacco sales. The ordinance follows the lead of several Bay Area cities and towns that have acted against flavored tobacco and vaping products in the past year, including San Francisco, Novato, Fairfax and Sausalito.

Board President Damon Connolly said the Supervisors recognized that the tobacco products have a disproportionate impact on youth and people of color according to a presentation by Marin HHS at the October 30 Board meeting.

“This represents a crisis right now,” he said. “Big Tobacco is clearly doing targeted marketing strategies that in effect create a gateway to addiction. … So I think we’re doing the right thing today. It’s a positive for public health.”

The County’s Public Health Officer, Dr. Matt Willis, emphasized that tobacco use is the leading cause of preventable death and that flavoring of tobacco products is driving a concerning increase in tobacco and nicotine addiction.

“After decades of progress on the reduction of tobacco use, we’re losing ground,” Willis said prior to the Board’s vote. “It’s time for new policy. We have a choice to act now against flavored products or to wait longer. The cost of waiting will be measured in lives that should have been spared.”

New data show that e-cigarette usage, known as vaping, has more than doubled in the past two years among Marin County seventh, ninth, and 11th graders. The largest increase was seen in the number of 11th graders who reported vaping regularly, from 11 percent to 28 percent. Most regular tobacco users said they became addicted when they were young and that their first use of a tobacco product was flavored. Flavoring masks the harsh taste of regular tobacco and entices young people into regular smoking. Electronic smoking devices offer flavors such as cotton candy, bubble gum, vanilla and honey while introducing nicotine to younger users.

Smoking decreased in the United States between 2004 and 2014 but the use of menthol cigarettes increased. Statistics show that smoking menthol cigarettes reduces the likelihood of successfully quitting smoking. The change in County Code also will help address disparities in health between races in Marin, Willis said. More than 80 percent of African American smokers use the menthol products that have been aggressively marketed in their communities.

Marin HHS’ Tobacco Prevention Services Office plans to support tobacco merchants with ordinance compliance efforts. Senior HHS analyst Robert Curry said all tobacco retail merchants were visited by staff at their stores in August and informed about the pending policy that was adopted November 6 by the Board of Supervisors. Curry said local retailers such as United Markets, CVS, Mollie Stone’s and all independent pharmacies that discontinued the sale of tobacco products reported that overall profits had not been affected by halting sales of tobacco products.

“The Marin public prefers to support businesses that do not earn their profits from people’s addiction or by finding young replacement customers for those who quit or died from tobacco-related diseases,” Curry said.

The Tobacco Prevention Services Office partners with other counties throughout the state in a Healthy Stores Healthy Community campaign that is a local collaboration with tobacco, alcohol and nutrition prevention programs that work toward healthy options.

The office allocates state and local dollars to deliver tobacco education programs to Marin residents and limit the harm of tobacco and related products. Marin HHS also collaborating closely with law enforcement, the Marin County Office of Education, the Smoke Free Marin Coalition and other community groups on tobacco education.