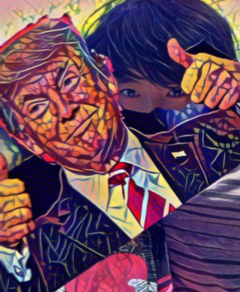 As David Leopold, Partner and Chair of Immigration for Ulmer & Berne and former President of American Immigration Lawyers Association, explained in an interview with MSNBC’s Katy Tur:

“What we have going on at the border and other areas is a systemic policy by the Trump administration to purposely inflict harm on children by separating them from their mothers…There is nothing in the law that requires it.

I would argue that it is unlawful and that it approaches some of the darkest days in the 20th century. This is what authoritarian governments do. Mind you, applying for asylum in the United States is lawful. It is under ethic laws we have signed onto internationally, and it is in our own laws. So it is the DHs, the WH taking children from their mothers. They’re violating the law. They are the ones who should be answering to the courts.”

In the past, unaccompanied children, those who crossed the border alone, were placed under temporary care. This situation is exasperated by the administration’s new policy of ripping children from their parents – essentially orphaning babies.

St John: The type of devastation we’re talking about – what Lee mentioned a family or separated mother doesn’t know where her child is for four days – that is entirely common right now in this administration – is that parents and children sometimes don’t have anyway to communicate with each other for days, for weeks, I’ve seen months where a parent had no idea where their child was after the US government took their child away.

Hayes: You’re suing – can they do this?

Gelernt: We don’t believe they can. We are waiting for the decision.…The named plaintiff in our case, she did time served for a few days for the prosecution. It’s been 7 months and they haven’t returned her child… They told her, ‘Your son is in Chicago.’ She said to us, ‘I don’t know if Chicago is a man, a place, a facility.’ That’s all they said to her: ‘Your son is in Chicago.’”

St John: I think what is happening is absolutely inhumane. I think you mentioned that a lot of things about immigration law are complicated and can be confusing. I would say this is not that situation. Taking parents and children and separating them for no good reason – there is no reason to do that – it is just unjustifiable frankly and inhumane.