While on some level this may seem like an appropriate action – I think it does NOT go far enough and serves ONLY to legitimize Trump and negate his personal accountability for the #WAT war with the American People.. What these leaders should be calling for is the resignation of the so called President of the United States through an action of the U.S. Republican led Congress-  to call for his stepping down in a similar VOTE OF NO CONFIDENCE type action that resembles how International parliaments work. I know this is unprecedented – AND so is the Trump failed ‘leadership’  – which has in essence lead an army of #WAT. (White American Terrorist.) See my Article – below.

Here is the Press Release:

WASHINGTON – Today, August 13 at 4:30 p.m. ET, leading civil rights and faith leaders will host a telephone press briefing to call on President Trump to directly disavow the white supremacists marching in his name in Charlottesville on Saturday. 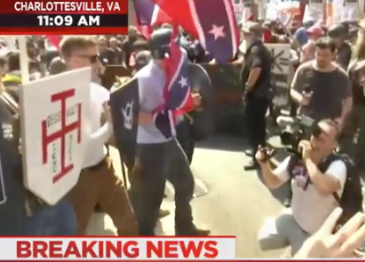 Is it up to Congress to Step in? This all too clear:-  In most democratic countries,  a President or Prime Minister – a true leader- would not be playing golf at a property in a manner that serves to enhance his family’s corporate

To The Organizers of Protests please refrain from referring to the KKK, White Supremacists, Nazis as ALT RIGHT or WHITE NATIONALISTS. They like those references-  as it provides them with movement legitimacy – in their eyes, in the name of progress! They must own who they truly are! By Melanie Nathan While much needed counter protest brought …

2 thoughts on “Do you Agree with Leaders Merely Asking for Resignations of Bannon, Miller and Gorka?”