Is it up to Congress to Step in?

This all too clear:-  In most democratic countries,  a President or Prime Minister – a true leader- would not be playing golf at a property in a manner that serves to enhance his family’s corporate branding on the very day that the Klu Klux Klan and White Supremacists have chosen to rally in honor of his rhetoric and campaign calls, all the while merely tweeting his feigned concern, in essence stroking his base.   Unless he had a part in it, of course. Today American history will be marked as the day it turned in on itself at the bidding of its so called President.

In fact in most democratic countries, such an apology for a leader would be compelled to step down in such circumstances.  Instead while he is being investigated by the FBI with a grand jury convened, he is conveniently chugging on the bottle of bigotry and surreptitiously unleashing his minions. Timing is everything “Let them kill each other in the name of deep seated long fostered hate.  And I will get a GO free Card while they are at it.”

Indeed he continues to swing that club while his KKK supporters are swinging their clubs at black clergy on the streets of Charlottesville, Virginia. And he tweets his nebulus messages – in what can only be described as grossly feigned solicitude, all the while knowing he is still courting them – his base.

The KKK and White Supremacist response reflecting that they “Get it” – he is not really saying anything more than providing a false equivalency  – he is attempting to play both sides and in thereby giving a tacit nod to Nazis and Klan alike:

When one knowingly dangles a HUGE piece of cheese outside a rathole, hordes of starving rats will come flying out to eat it! The Trump cheese has been torn to the bone. If there was ANY doubt that Trump is responsible for todays UNcivil war, fueled by Trump’s Campaign promises, let that now rest.  We see today’s rally as a culmination of  the expectation that some actionable result would follow the tacit and explicit promises of Trump in his campaign.  These blood thirsty antisemite, racists, bigots expected Trumps verbiage to have a result and if it did not, then it would be up to them to take action.   Or maybe they believe they were always the intended action.   The final solution in their hands?

The anti semitism, racism and bigotry of the administration as propped up by the Trump appointments in Pence, Session, Bannon, et al, –  all helm a blood thirsty intent, dripping out of the salivating mouths of those White Terrorists determined to rid America of the “OTHER”, asserting in their words “take America back again”, resonating “Trump’s own “make America great again.” The KKK, White Supremacists (please don’t call them alt right or nationalists) chanting “Jew will not replace us” and Blood and Soil”, in true Nazi fashion, as well as “White Lives Matter” said it all. With bats and clubs in one hand and the the Confederate flag and Swastika in the other,  we are left with zero doubt as to intention of these White American terrorists.

According to David Duke who was at the rally and calling for its support, the Nazis and KKK and White Supremacists who rallied at UVA were there to “fulfill the promises of Donald Trump”. Yes he said that and we who bore witness to the campaign and warned of its trajectory, believe him.

Trump has led the Americans who voted for him to believe that the greatest danger to our country is Islam and “Muslim Terrorism,”  as well as the “rapist, thieving murdering Mexicans, ” all undocumented immigrants. However now apparent, the greatest danger facing America is Donald Trump himself. He leads White Terror in our country.

Trump is a slimy, impulsive, psychopathic White Supremacist who has pulled off the most unimaginable paradox of all time. While purporting to protect, he has actually unleashed his troops of KKK, Neo-Nazis citizens on the “others” – all to do his bidding. 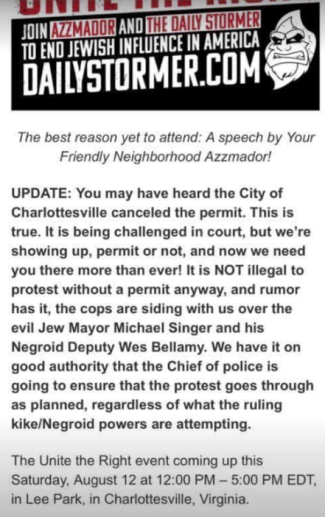 Trump has several armies at his call – as Commander in Chief of the American military – he can send Americans off to fight anyone anywhere – or merely by virtue of his office seat, incite others to lash out at us, inducing war. Just this week we are witness to his crazed impulsivity- screaming hell and fire and enticing North Korea to launch its weapons against anyone anywhere, threatening preemptive actions against Venezuela – he is on a path of destruction – all in the name of that which is not truthfully dangerous- as a guise to hide that which is!

And now he has a people army too – as we see the White Supremacists, Neo Nazis, And KKK, using the Constitution as tool for hate – arming themselves and using rights to rally against their fellow Americans. In truth Trump, Pence, Sessions all participating in White Supremacist terror, and their henchmen are in effect leading the charge.

This this is not a question of mere law and order. This is civil war. Trump and a crew of White Supremacists against The American People – anyone who is an “OTHER”: People of Color, Jews, Muslims, Women, Gays, Lesbians, Transgender, Immigrants, etc. Its all so clear.

The only chance we have is if Congress sees the light and steps in – immediately – noting Trump as the enemy of the American people. He has incited a civil war and there is no escaping that fact. David Duke is speaking for those who Trump incited and confirming its truth.

Trump and his Administration must be impeached and very fast.  Or some fitting new law delivered to save us. Congress must set a precedent- they stop the caving cowardice and they must act as the Congress of the people.  An if for one minute they purport to represent those who wave a Nazi flag, then we the Anti Fascists must revolt!

At the very least, surely Republicans no longer believe that Trump is in office for the sake of anything decent or good. He cant get anything done. He is playing golf dammit!

Is Congress going to sit back and watch the man with fingers on all the buttons Tweet and brand and golf while America burns because of him? 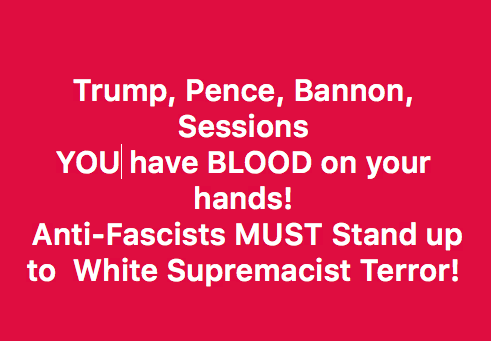