Museveni Changes the words but keeps the tune…..” the man who chases two animals while hunting, ends up with failing to kill any”

Ugandan President Yoweri Museveni wrote a piece published in two Ugandan News Magazines, indicating that he has new thoughts about the onerous anti-homosexuality legislation, which he once signed into law, which was invalidated by the Courts on a technicality, and which Ugandan Parliamentarians now seek to re-table.  Museveni is now arguing that the impoverished East African country needs to reconsider the impact of such laws on trade and economic growth.

In his editorial carried by 2 leading national daily publications, the 30 year dictator, President Yoweri Museveni, said he only signed off on a controversial anti-gay law earlier this year because he wanted to protect children and stop people being “recruited” into homosexuality, indicating he nonetheless sustains the mythological context within which the purported need for the legislation is rooted.

It is heartening to see that the President is acknowledging that there are more important issues for Uganda to deal with and so indeed ” the man who chases two animals while hunting, ends up with failing to kill any.”

A prophetic and sinister metaphor for what was once known as “The Kill the Gays Bill.” And most profound, when one notes that a significant amount of Ugandan LGBT people remain in hiding or in fear of being hunted down by government, family, and friends, seeking vengeance or to eradicate the shame of homosexuality, in direct response to the very legislation Museveni had previously signed.

It is interesting to note that Museveni blames foreigners for coming to Uganda to “recruit” homosexuals – an obvious impossibility, while failing to blame “foreigners” (Scott Lively, Lou Engle, et al) who recruited the Churches to hate homosexuals – of course homosexual already existed in Uganda. The denial that homosexuality exists in every society and culture as a human sexuality, including in Uganda, exacerbates the myth and lies surrounding the issue. With that said, – hey who cares about his continued warped thinking – as long as he leads Uganda away from this ridiculous waste of time! 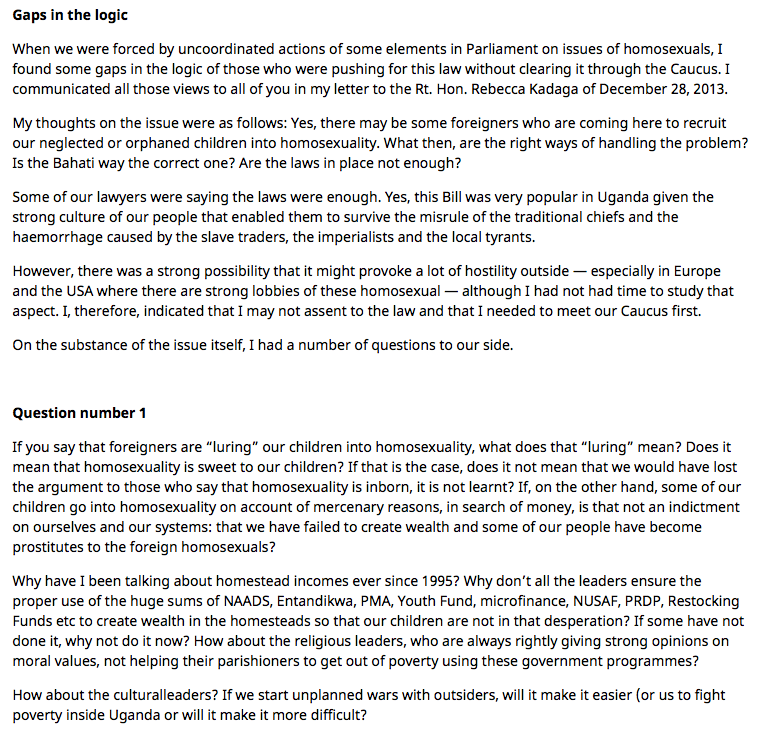 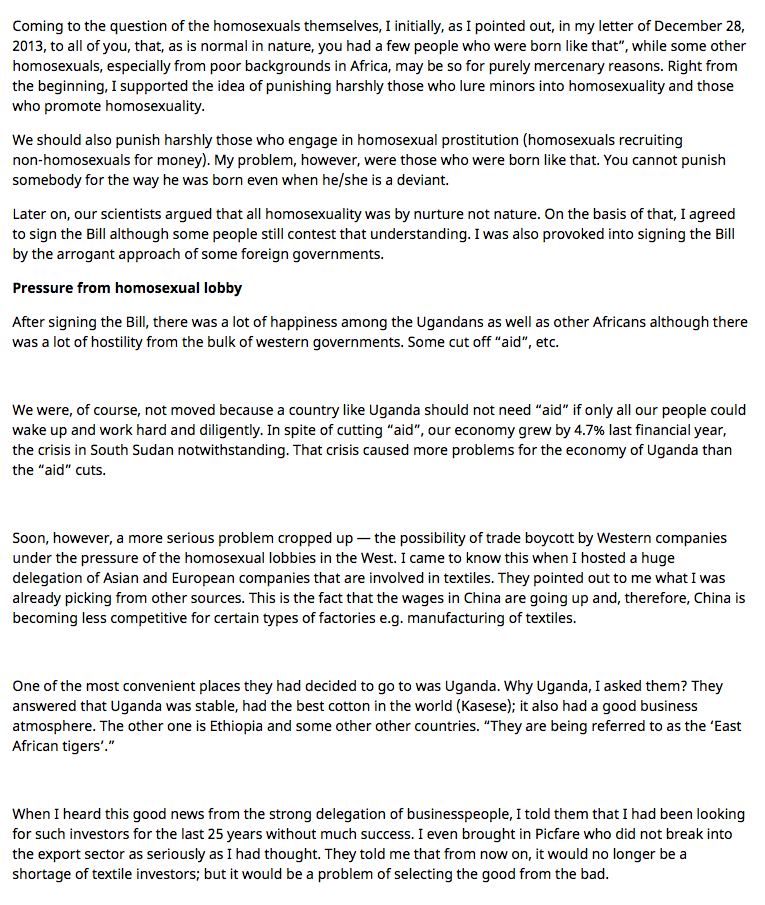 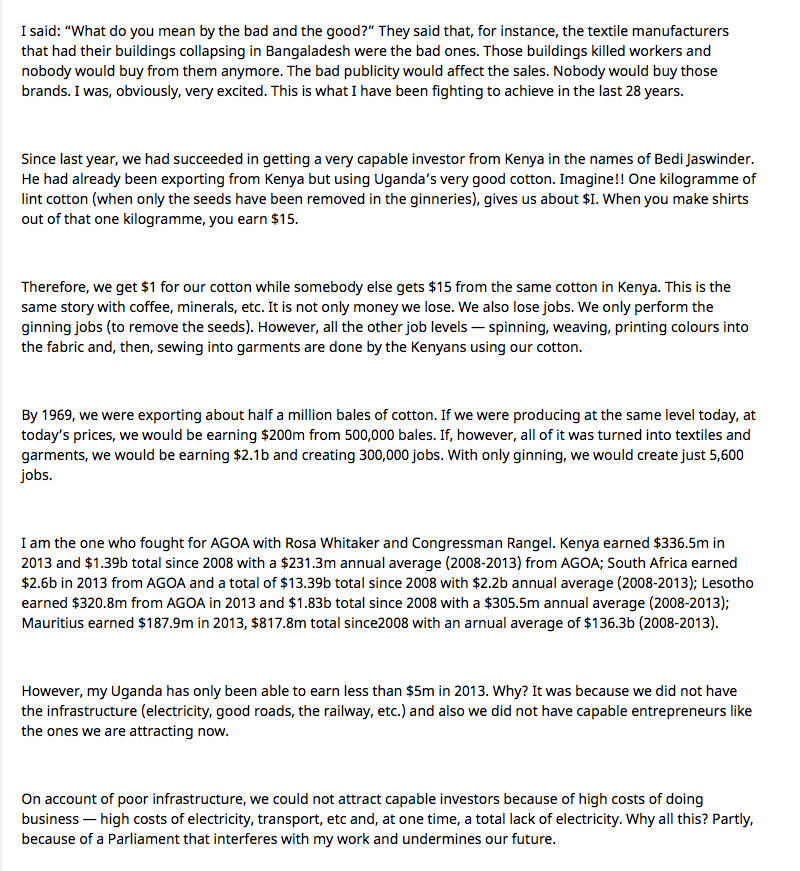 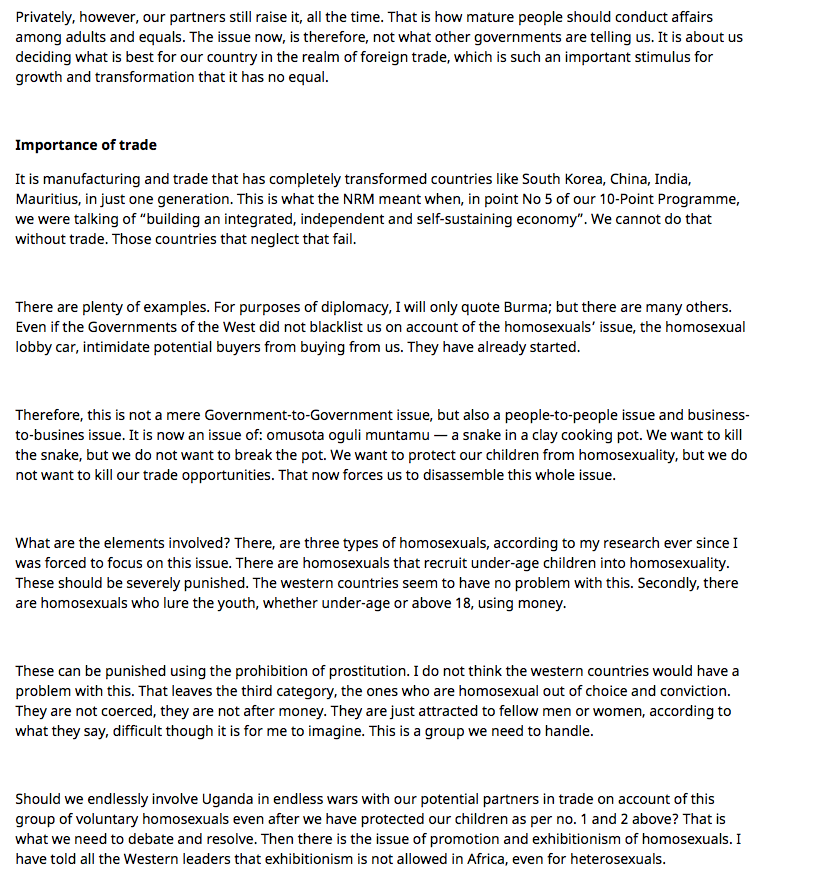