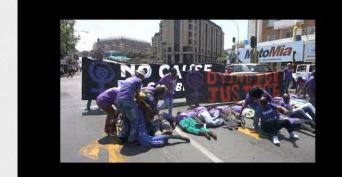 South African lesbian feminists called for a pause, a minute of silence at the Johannesburg  (Joburg) Gay Pride Parade, to remember lesbians and LGBTI victims of homophobic murders,  yet were denied their moment by Pride organizers.

A group calling themselves One in Nine chanted “one minute of silence” and then lay down along the route, singing songs noting oppression and the fight for visibility to end homophobia.

It would seem from the video that Johannesburg Pride organizers and marchers preferred to overrun the request, rather than allow the voices of the lesbians to be heard.

Invoking  apartheid’s  “I am black and I am gay- I am oppressed because I am black and because I am gay and so I must fight for both,”  the group noted that despite the demise of  apartheid and an all inclusive constitution, in effect the  oppression is the same. ”  Both forms of oppression, two decades into the ‘new’  South Africa remains,  as black lesbians they are targets of hate and LGBTI community seems itself to foster old boundaries.

The call is out that Johannesburg Pride, and others too,  have traded political content for capitalism.

While the video clearly shows the rejection of the group Pride organizers have touted Johannesburg Pride this year as follows:-

Over the weekend, an estimated 15,000 people braved the rain and cold to attend Johannesburg Gay Pride. To make the event more inclusive, reports Transracial, parade organizers arranged for free shuttle buses from outlying township to the parade route in the northern suburb of Rosebank. The SABC reports: “This year’s activities are focused on addressing hate crimes against gays and lesbians. Some wore paper bags over their heads so as not to be identified. Others wore bright and daring attires as part of the event.”

I have sent requests for comment by Pride organizers and will update this post when I receive a response.

While my BLOG broke this news – more can be read from a new article describing  ‘One in Nine’ side   at http://sacsis.org.za/site/article/1450  and from JHB Pride side at their website.

The One In Nine Campaign was established in February 2006 at the start of the rape trial of Jacob Zuma, to ensure the expression of solidarity with the woman in that trial as well as other women who speak out about rape and sexual violence. The Medical Research Council (MRC) study on sexual violence (2005) indicated that only one out of every nine rape survivors report the attack to the police. This statistic prompted the name: “One In Nine”. Furthermore, statistics indicate that of the cases that do reach the courts, less than 5 % of the rapists are convicted. This highlights the serious need for reform of the institutional framework for responding to women who speak out.

VISION
The One In Nine Campaign works for social justice in a society where the sexual rights of women are respected, upheld and advanced.

MISSION
The One In Nine Campaign works with organizations and institutions involved in HIV/AIDS, violence against women, women’s rights, human rights, and lesbian, gay and bisexual activism to ensure that the issue of the sexual rights of all women is addressed through
Building solidarity , Feminist Knowledge Production, Media, Justice and Legal transformation, Direct action

By Melanie Nathan, July 05, 2012. While South African authorities continue to bungle investigations and fail to provide protection, panic and anger seems to be increasing amongst South Africa’s LGBTI Township communities, with the recent spate of hate murders. Yet another lesbian is reported raped and murdered.  The 29 year old was found brutally raped […]

Signals rise of rampant violence against lesbians  in South African Townships Melanie Nathan, June 25, 2012. Phumeza Nkolonzi, a young lesbian from Nyanga Township was brutally murdered last night in front of her family and activists are asserting the motive was hate. The murder occurred at her family home  in Mau Mau, Nyanga, a  township […]