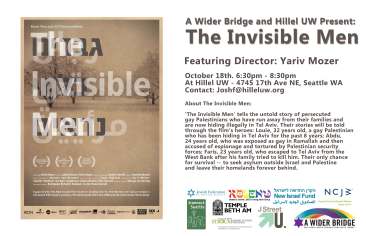 A Wider Bridge and Hillel UW will host a screening of “The Invisible Men” and a discussion with its director, Israeli filmmaker Yariv Mozer. The film won the Special Jury Award at Tel Aviv’s international documentary film festival “ Doc Aviv 2012” in and the Outstanding Documentary Feature Award at Frameline 36, the San Francisco International LGBT Film Festival. “The Invisible Men” follows the lives of three gay Palestinian men who flee the West Bank in fear of their lives, and enter Israel illegally to live in hiding in Tel Aviv.

The movie sensitively depicts the challenges and hardships they face as people without a home – on the run from family in the West Bank, hiding from the police in Israel – the painful choices that confront them, and the courageous Israelis who work to help them.

This visit by Mozer, director of several films that have screened internationally, is the first by a major Israeli gay figure since March’s visit by leaders of the Alliance of Israeli LGBTQ Educational Organizations, which became the source of significant controversy in the Seattle community.

“Yariv Mozer gives us insight into stories of men that few even in Israel and the West Bank are aware of,” says A Wider Bridge Executive Director Arthur Slepian. “These men are the heroes of the film,” Slepian continues. “The film shines light on both the severe challenges faced by gay men in the Palestinian territories and the policies of the Israeli government that play an important part in the difficulties faced by the men portrayed in the film.”

Slepian added “This film feels like the right vehicle with which to continue the discussion about LGBT life in Israel in Seattle.  This documentary gives the Seattle community the opportunity to understand an aspect of the gay experience in Israel and the West Bank that adds a rich layer of complex human reality to our often one-dimensional picture of the region.  And we are very proud of the broad coalition of organizations that have come together as co-sponsors of this screening.”

In addition to A Wider Bridge and Hillel UW, this screening is co-sponsored by the Jewish Federation of Greater Seattle, The National Council of Jewish Women, The New Israel Fund, Temple Beth Am, J Street U., Kolenu (Seattle’s Jewish LGBTQ Young Adult Group), JConnect Seattle and the Stroum Jewish Studies Program.

“The Invisible Men” will screen at numerous film festivals and other North American venues this October and November.

For more on “The Invisible Men” and a trailer see http://awiderbridge.org/the-invisible-men-dir-yariv-mozer/

Related Articles
Seattle LGBT Commission Shuts Down Israel’s LGBT Voice -by Melanie Nathan on March 15, 2012  The unconscionable shutting down of gay, lesbian and transgender voices by our own community cannot be tolerated, for any reason whatsoever – I take blogger’s license – I am sad and disgusted! By Melanie Nathan 03/15/2012 Reports have come in from the Seattle commission’s meeting tonight that in an act of unprecedented cowardice the Seattle […]  Continue Reading →

Seattle LGBT Commission Issues Apology to Israeli Guests But Should Still Resign –by Melanie Nathan on March 21, 2012  The Seattle City LGBT Commissions has issued a formal apology, by posting it on Facebook, to the LGBT public and the Israeli AILO group, as can be seen below, for its actions in cancelling an event that in essence served to boycott and silence the visiting group from Israel. It admits the “pain, offense   • Continue Reading →