The High Court in Bulawayo in a groundbreaking judgment, awarded damages against Zimbabwean police in favor of a transgender woman. 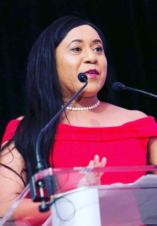 Ms. Nathanson sued Zimbabwe police in 2014, after she was arrested by six riot police officers on charges of “criminal nuisance” for wearing female clothes and using a female toilet. She was forced to undergo invasive and humiliating medical/physical examination and asked to remove her clothes in front of five male police officers in order to “verify her gender.”

After 2 nights in detention under horrendous conditions a local Magistrate dismissed the case as there was no evidence of wrongdoing.

Ms. Nathanson sued the home affairs minister and the police.The judge described the arrest of the trans activist as outrageous and said her prosecution was thoughtless and malicious.

“This has been a long, emotional rollercoaster for me. I have waited almost 5 years for this moment. I am elated. This is an incredibly life-changing decision. It is a great moment for Zimbabwe. It affirms and recognizes the fundamental human rights, freedoms and dignity of all citizens.”

“All persons regardless of sexual orientation and gender identity are equally entitled to have their rights and dignity respected and protected. Governments can no longer sit-back while vulnerable persons such as transgender persons face ongoing stigma, humiliation and discrimination with impunity. I hope that this case will send a strong message that we are all human and that our diversity should be celebrated. My wish is for society to be more tolerant where LGBT persons are not in constant fear of being targeted”.