In Climate of Escalating Antagonism by Kenyan Authorities toward LGBTI refugees

Following the recent endorsement by Kenya’s High Court where it refused to decriminalize Penal Codes criminalizing homosexuality, it is not surprising that President Uhuru Kenyatta of Kenya has yet again demonized Lesbian, Gay, Bisexual, Transgender and Intersex (LGBTI) community by declaring  homosexuality as unacceptable to Kenyan culture. All scholarly theories point to this as a lie and slanderous to the truth about African culture which was decimated by Colonialism.

Speaking when he met community elders from over 20 counties at the State House, Uhuru said Kenya will do everything to filter out ‘that which disregards societal values and traditions.’

Next week an LGBT Group led International Conference on Population and Development is being held in Nairobi and its is clear, instead of affording respect, this is held in contempt by the Kenyan President:

In fact the white man upon his invasion of Africa, with his army of missionaries, declared homosexuality a taboo. The truth is homosexuality is not unAfrican as homophobic leaders such as Kenyatta would have you believe, but rather acceptable in most African culture, until Colonialists and their religions forced the taboo.

Given this attitude it is no wonder that LGBTI refugees from several African countries such as Uganda, Burundi, DRC, Rwanda, Ethiopia and Somalia who seek UNHCR and Government protection in Kenya are experiencing escalating hardship at the hands of their hostile host, Kenya. We are hearing at African HRC that the RAS (Refugees Affairs Secretariat) is now refusing to register LGBTI refugee despite their international obligation to do so.

Illustrative of the fact that gays are used as a constant ping pong ball in the political scapegoating by such leaders, Uhuru Kenyatta dismissed gay rights  as a “nonissue” in the country:

Kenyan President Uhuru Kenyatta dismissed gay rights as a “nonissue” in the country and said it was not a priority during a joint news conference with President Obama. Obama pushed for equal rights for gays during his visit, saying that “when a government gets in the habit of treating people differently, those habits can spread.

Of course it is an issue – Gay sex is punishable by up to 14 years in prison in Kenya. 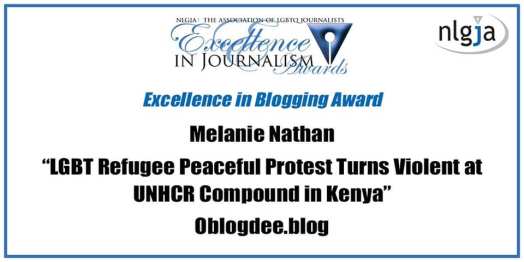