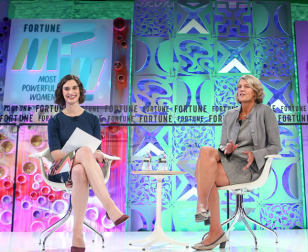 If you are a ‘Most Powerful Women’ then show us who you truly are! Follow the example of the award-winning filmmaker dream hampton!  Upon hearing that Kirstjen Nielsen, Trump’s former Department of Homeland Security secretary who oversaw the caging of children and separation of families, is being given a platform at this month’s Most Powerful Women Conference, hampton backed out in protest! And indeed some have followed- as soon thereafter we saw Secretary of State and 2016 Democratic Presidential nominee Hilary Clinton and then Grammy winner Brandi Carlile, follow suit.

Unfortunately the Buzzfeed article which notes Carlile pulling out of the conference, fails to credit hamilton as the first, naming also Clinton! Lets get this right people!

Indeed given that Kirstjen Nielsen defended her legacy of carrying out Donald Trump’s policy of separating migrant families as his homeland security secretary saying she was simply following the law, indicates the very reason why any woman of substance should have stood down in lieu of Nielsen being uninvited. Surely her attempt to justify ripping babies from mothers should not have had such a platform:

“I don’t regret enforcing the law,” said Nielsen at the Fortune Most Powerful Women Summit. The moderator, PBS journalist Amna Nawaz, repeatedly questioned Nielsen on whether she regretted signing off on a memo that authorized the routine separation of migrant children from their families so that their parents could be detained. (Huffpo) 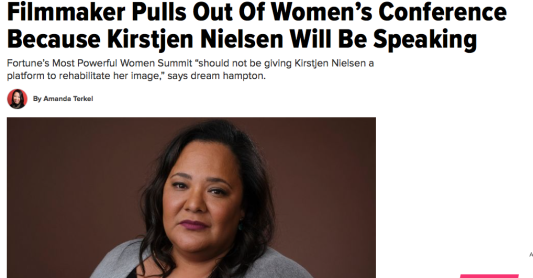 Fortune should not be giving Kirstjen Nielsen a platform to rehabilitate her image. I’ve worked all my life to tell the stories of women, girls and families. Sharing a stage with Nielsen, who separated immigrant families and put babies in cages, would have put a stamp of approval on her immoral and reprehensible actions and help legitimize the terror that Trump is inflicting on immigrants and communities of color. So I’m cancelling my attendance and encourage other speakers to do the same. I’m thankful for the organizing CREDO Action, Define American and Bend the Arc have done to hold Trump collaborators like Nielsen accountable for their atrocities.

Reputation rinsing ― using visible, celebratory platforms to restore and normalize monstrous abuse ― was actually common practice for predators like R Kelly and Jeffrey Epstein. When every infant, toddler, child and teenager Nielsen is responsible for ripping from their families is released and reunited, when attempts at restitution are made, then perhaps she can face one of them for a public “interview.” Perhaps they’ll begin by asking her a softball, like “Does she now know Norway is a white country?”

Fortune failed to listen to the myriad of activists who protested Nielsen and insisted on her being uninvited. They tried to justify her appearance by telling HuffPost that organizers wanted to make sure that she had to face “tough questions publicly.” This only served to enhance the fact that they gave her platform to dig in and hurt America further!

Fortune served up more opportunity for Nielsen to justify the unspeakable to America and especially America’s women! They allowed her to normalize the policy and platformed her attempt at redemption! They gave her THAT platform -while kids remain caged, mothers detained, father’s deported and families destroyed forever!  Anyone not dramatically offended by THAT ought to reconsider and reflect! This platform to normalize what our country has done is nothing more than serving the Devils slimy poop with whipped cream and cherries on top -no matter what and where or how embedded, it can never taste good – yup… its is unacceptable:

To Fortune: NO you do not lead for Women when you provide platforms for xenophobia, white supremacy and that for which most US women are ashamed!

To the following Sponsors: SHAME!