The Senate voted today to move forward with confirming Matthew Kacsmaryk to be a lifetime federal judge, despite strong protests from Democrats ― and one Republican ― over his record of opposition to LGBT rights and abortion rights. 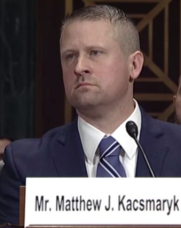 The Senate voted 52-44 on a procedural step to advance Kacsmaryk’s nomination to the U.S. District Court for the Northern District of Texas. Every Democrat present voted no. Every Republican but one, Susan Collins (Maine), voted yes.

Kristine Lucius, executive vice president for policy and government affairs at The Leadership Conference on Civil and Human Rights, issued the following statement on the Senate’s vote to advance the nomination of Matthew Kacsmaryk for a lifetime seat on the U.S. District Court for the Northern District of Texas:

“Kacsmaryk is a right-wing extremist who has made a career out of dehumanizing LGBTQ people, debasing women, and assailing health care rights. He has expressed staunch opposition to the Equality Act, marriage equality, and promoted the dangerous lie that being transgender is a ’delusion.’ He has attacked Roe v. Wade and challenged the Affordable Care Act’s contraceptive access.

“Kacsmaryk is biased and would have no qualms with attacking individuals simply because of their identity while in his courtroom. He lacks respect for precedent and will roll back our hard-fought rights and freedoms. Senators must make it clear that there is no place on the federal bench for an extreme ideologue like him.”

Read The Leadership Conference’s letter in opposition to the confirmation of Matthew Kacsmaryk.

The Leadership Conference on Civil and Human Rights is a coalition charged by its diverse membership of more than 200 national organizations to promote and protect the rights of all persons in the United States.  www.civilrights.org.