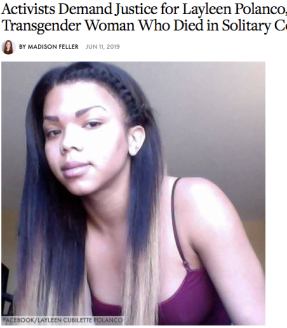 WASHINGTON–Last week, we lost another member of the Black Trans Community. Layleen Polanco, a 27-year old Black trans woman, was found dead in her cell at Rikers Island, where she had been serving time for an alleged assault and possession of a controlled substance. Polanco was held in an unit specifically intended to reduce possible violence against trans and gender non-conforming people. She was found unresponsive in her cell and pronounced dead after an hour of revival attempts. The nature of Polanco’s death is still being investigated.

Polanco is the tenth trans Black woman to die in 2019. 26 trans people were killed in 2018 .  Polanco is the most recent victim of gender violence, transphobia, and transmisogynoir. Sister Polanco’s death comes on the heels of Chynal Davis’s. In a time when black trans women are disproportionately affected by violent crime, it’s imperative that we help spread awareness of these tragedies and do the work to end gender violence impacting all Black women and girls.

David Johns, Executive Director of the National Black Justice Coalition (NBJC), encourages us all to increase our efforts in supporting trans and cisgendered women alike in our current socio-political climate.  “It is time to have meaningful and more nuanced conversations about sexual identity, gender identity, and gender expression. These conversations are only challenging when we actively avoid them or employ stereotypes. Conversations about gender justice and Black trans women having an average life expectancy of around 30 years of age can be life saving.”

Bookmark this page and be on the lookout for the NBJC upcoming Words Matter-Gender Justice Toolkit, which will include resources to facilitate critical conversations regarding gender justice for Black women and girls and the holistic health and wellness of the Black community.