As the Nation Rallies to Raise Awareness for Sexual Violence, A team of Filmmakers Launch a Unique Project hoping to Change the Law for Domestic Violence. 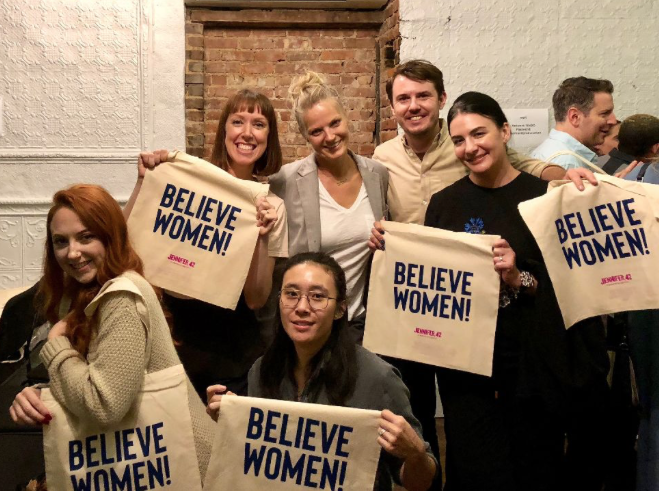 (Brooklyn, NY, October 1, 2018) An unusual theme for an animated movie, domestic violence is at the center of the hybrid feature film Jennifer, 42, directed by filmmaker Elle Kamihira. Gorgeously drawn by award-winning Animation Director Yulia Ruditskaya, Jennifer, 42 tells the riveting true story of Jennifer Magnano, a suburban mother of three, and her journey through a 15-year abusive marriage, the family’s daring escape, and their epic battle to be free from the coercive control and violence of father, Scott.

“We believe that telling this powerful multi-voice narrative through animation will make this story accessible to all kinds of people,” says Producer Katie Hyde. “That it will expose a wider audience to the true nature of the most private and common kind of violence that women and children face.”

“While our goal is to demystify what goes on in domestic violence households,” Kamihira notes that Jennifer, 42 “is not a ‘sad battered woman’ story, it is not a ‘victim’ story. It is, however, a dramatic, twisty-turny story about a brave family who fought like hell to get out of a bad situation. They were clever, resourceful, resilient – and they tried very hard to get help from the criminal justice system, advocacy, shelters, banks, law enforcement and everywhere else.”

The crowdfunding campaign is part of a greater strategy for the film’s independent filmmaking team led by Hyde of Indie City Films, to build a community of agitators that will demand change in the way our laws, criminal justice system, and culture deals with abusers.

“One of our goals,” says Kamihira, “is to bring the term ‘coercive control’ to the forefront of the domestic violence conversation, with an eye toward changing federal and state laws to criminalize coercive control*, as the UK did in 2015. There, coercive control is a serious crime punishable by up to 5 years in prison.”

Three women per day are murdered by their male partners in the US. These numbers, sadly, have not changed much since the 1970s. In this time of #metoo, Time’sUp and female reckoning, Jennifer, 42 might be just what’s needed to explode old ideas about domestic violence and make room for new ways to actually help women live free and safe from male violence.

*Coercive Control is a cornerstone of Domestic Violence. Coercive control, noun (/kəʊˌɜː.sɪv kənˈtrəʊl/ ): – A strategic course of oppressive behavior designed to secure and expand gender-based privilege by depriving women of their rights and liberties and establishing a regime of domination in personal life.

Note from Melanie Nathan, Publisher of this Blog:
My daughter, a senior at NYU, is gratefully an intern on this extraordinary project, Jennifer, 42.  Regardless of her participation, I think this is one of those must fund projects, that we ought to be so proud to support. What stands out for me as an activist and advocate is the imperative intersection of creativity with the critical issues of our time, lending art to that which we have for generations seen as “too ugly to speak about,” “easier to sweep under the rug,” least of all that which we reveal through our paint, pen and performance.  I want the resulting promise of change for my daughters and your daughters too. The Kickstarter campaign provides a menu of fun rewards and makes one feel that one’s $10 is super important. Please take a look. Its worth and the faith in the filmmakers and their team is further evidenced by how the Kickstarter took off in the first day. This is something we should all want to be part of. I believe it is a reward in and of itself for all of us to be given this opportunity to contribute to what promises to be an integral contributor to our emerging movements.

More information on JENNIFER, 42 can be found on the website jennifer42movie.com

BY MELANIE NATHAN, mostly a mom!
And then all this other stuff too:

My e-mail commissionermnathan@gmail.com
Support our work at African Human Rights Coalition
Check out my shenanigans on Facebook
Follow me on Twitter – @MelanieNathan1
where I have been blocked by Donald J. Trump
Check out my Instagram: Commissionermelnathan
Visit my Family Law Mediation site: Private Courts
RESIST TRUMP on FACEBOOK
#MeToo #BelieveWomen