California Democrats rebuked Sen. Dianne Feinstein at their annual convention this weekend, denying her the party’s endorsement in this year’s Senate race, and giving a majority of their votes to her apparently more liberal primary challenger, Kevin de León. While many may slot Feinstein in the ‘moderate’ zone, I have seen her, through the years, as progressive in her thinking, sometimes beyond others who we perceive as such.

My perspective is based on my own experiences with Senator Feinstein and her office, over a span of 20 years, and that experience is very telling. It may reflect a side of the Senator that many have not had the good fortune to experience. I did! I am one who has been privy, on several occasions, to the inner working of an extraordinary office, and with that, the importance of her experience and seniority, I am absolutely certain that Senator Feinstein must have one more term.  I feel very strongly about this:

Here is what I posted on my Facebook Page:

There is a side to Senator Feinstein to which I have been privy – and its sad that many more do not know her the way I do: I am a constituent who she truly cares about!

Way back in 1997, when my ex same-sex partner and I had problems with the adoption of our baby daughter in Vietnam – the smooth machinery of Feinstein’s office made sure we were able to bring our baby girl home. Hannah is now 21 and a Junior at Tisch, NYU.

In 2009 when I led the advocacy for the unique and extraordinary measure of a Private Bill for a lesbian mom about to be deported, all the organizations usually charged with that type of work, laughed at the idea. They said Feinstein would never do it. This was before Hillary Clinton and Barack Obama had ‘evolved’ on same-sex marriage. Feinstein did it. She introduced a Private Bill into Congress for one woman and her family ! And continued to do so each year thereafter until DOMA (The Defense of Marriage Act) fell in 2015.

In 2008 when my own same-sex wife could have been subjected to deportation, leaving me with an untenable Sophie’s choice between my 2 little daughters, Senator Feinstein did not hesitate – again she helped.

Then when I was a Grand Marshal for San Francisco Pride in 2014, in recognition of my global LGBT work, Senator Feinstein wrote an individual letter to several US embassies in Africa – in support of each of the LGBT people – mostly persecuted – to come to the USA – to march in my Pride contingent.

Unfortunately the Obama/Kerry Embassy declined the VISAS because they feared the invitees would not return to their countries of persecution – fearing that they would remain in US for asylum. Feinstein probably knew of that so called ‘risk’ and still agreed to provide this individual support to over 20 LGBTQI people from several African countries.

This Senator has an extraordinary office that has always been forward thinking, placing her constituents at the fore of what is fair. It is heartfelt.

By the way I gave testimony for a Kevin de León resolution in the CA assembly on similar issues. He is a great guy.  In my opinion he cannot do, not yet,  what she can still do.  Let him wait until Feinstein sees out one more term. We need her and her seniority at a time like this. I believe she could easily retire. She does not need the Senate for one single selfish reason – but she selflessly realizes how much we need her!

Thanks to Senator Feinstein MY family has remained in the USA and my daughters could be raised together here in Marin County.

I will never forget!

Just 37 percent of delegates to the statewide convention, held this year in San Diego, backed Feinstein in her bid for a fifth full term. More than 54 percent backed state Senate leader Kevin de León, who entered the race in October. Candidates needed 60 percent of the vote to win the party’s endorsement, making Feinstein the first incumbent senator in recent memory who will run in June’s primary without official backing. I don’t understand how much more supportive toward the left Feinstein could be than recently demonstrated and given the personal history I reflect above.

There are many more good reasons to support Senator Feinstein in this race – however I chose to focus on what was personal to me, elucidating information that few would know and a side of her that she tends not to make public.  Now don’t forget to vote and wisely. 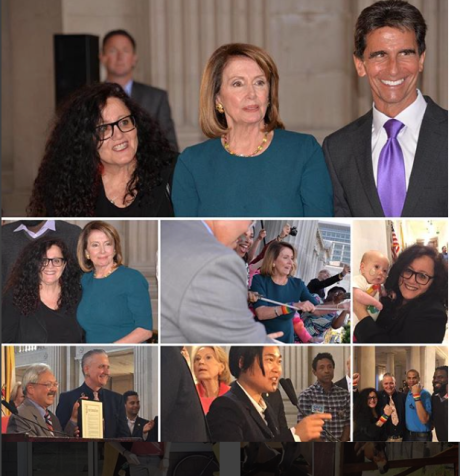