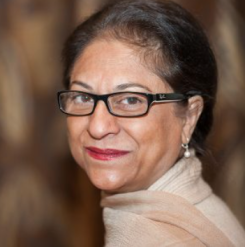 Pakistani human rights lawyer Asma Jahangir, has died of a heart attack at the age of 66. Jahangir had served as the UN Special Rapporteur on Human Rights in Iran since 2016.

This from Right Livelihood Award Foundation, an organization who named her  LAUREATE:

“Asma Jahangir was among the most inspiring human rights lawyers of her generation. She was a lighthouse against injustice and religious fanaticism in an increasingly anti-democratic world. She demonstrated what it really takes to defend human dignity – from standing up for the most vulnerable people on the ground to defending international law in senior UN roles.”

Asma Jahangir has over three decades shown incredible courage in defending the most vulnerable Pakistanis – women, children, religious minorities and the poor. She received the 2014 Right Livelihood Award “for defending, protecting and promoting human rights in Pakistan and more widely, often in very difficult and complex situations and at great personal risk.”

Having founded the first legal aid center in Pakistan in 1986, Jahangir courageously took on very complicated cases and won. For her relentless campaigning against laws that discriminate against women, and for continuously speaking truth to power, Jahangir was threatened, assaulted in public and placed under house arrest. She made history when she was elected as the first female President of the Supreme Court Bar Association of Pakistan in 2010.

Ole von Uexkull said:
“We express our deepest condolences to Asma Jahangir’s family at this difficult time. Her passing is a colossal loss for Pakistan and the world. The Right Livelihood Award Foundation and its family of Laureates around the world will do whatever is in our power to keep Asma’s legacy alive.”.

Watch a video interview with Asma Jahangir recorded in 2017.  Read more about Asma Jahangir here. Her acceptance speech for the 2014 Right Livelihood Award Presentation, held in the Swedish parliament, can be found here.

African Human Rights Coalition:
We extend our deepest condolences to the family and friends of renowned Pakistani human rights lawyer, Asthma Jahangir, the Women of Pakistan, the Pakistani human rights community, and all who mourn her sad and untimely loss. She will be remembered as a true inspiration who stood tall for all women in the face of adversity.