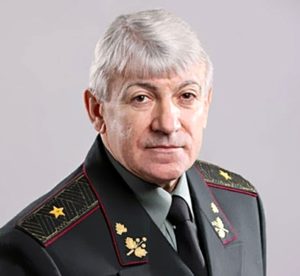 The Simon Wiesenthal Center has called upon the Ukrainian government to take legal action against retired Security Service General Vasily Vovk in the wake of a recent Facebook post of his in which he wrote that he intends to murder Jews, among them Jewish MP Vadim Rabinovych.

In a letter sent to Ukrainian ambassador to Israel Hennadii Nadolenko by its Director of Eastern European Affairs, Dr. Efraim Zuroff, the Center emphasized the severity of the general’s comments and lack hitherto of an appropriate response by the Ukrainian authorities.

“I am aware of the fact that the embassy here in Israel responded to express your regret about the ‘highly provocative post of [an] anti-Semitic character,’ but there is no indication that any legal action of any sort has or will be taken against General Vovk. So although the embassy ‘condemns all kinds of manifestations of anti-Semitism, xenophobia, and other forms of intolerance,’ the bottom line as far as the Ukrainian authorities are concerned, is absolute impunity for vicious anti-Semites.”

We urge you to convey our concerns to the authorities in Kiev with a demand that appropriate and resolute action be taken against General Vovk, to send a clear message that in democratic Ukraine there will be no tolerance whatsoever for anti-Semites and bigots of any type.

For additional information please contact the Israel Office of the Wiesenthal Center.  Join the Center on Facebook, www.facebook.com/simonwiesenthalcenter, or follow @simonwiesenthal and @EZuroff for news updates sent direct to your Twitter feed.The Simon Wiesenthal Center is one of the largest international Jewish human rights organizations with over 400,000 member families in the United States. It is an NGO at international agencies including the United Nations, UNESCO, the OSCE, the OAS, the Council of Europe and the Latin American Parliament (Parlatino).