Now that power has been transferred and there is anything but PEACE in America: Now that you are bearing witness to an unprecedented abuse of power and the flagrant defecation by a sitting president on our Constitution and now that you are seeing the resulting upheaval and confusion and injustice and inhumanity – I wonder if you finally realize that none of this is normal.

After Trump’s Muslim Ban and the resulting infringement and suffering with regard to Immigrants/ refugees/ visa/ Green Card holders – the subsequent court order halting the ban – the Executive Branch’s orders to defy the Court Order – I ask you – surely you see this as a possible impeachable abuse of power?    And regardless of whether or not you see it as such, then I still ask:

If you are able to see that none of this is normal – and that this man is abusing the office of the President of the United States  – do you plan to continue to legitimize him – and to vote YES on his nominees? Or will you have the courage to resist and obstruct?

Let me remind you that while the Electoral College voted for Trump – the popular vote remained with a people vehemently against everything that Trump stood for and promised he would do. Many of us had the vision and foresight to know that he meant what he said and that he would impose religious discrimination on this beautiful land.

I CALL ON YOU TO RESIST! 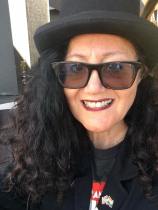 Melanie Nathan
In my capacity as an American Mom
Commissionermnathan@gmail.com
@MelanieNathan1