When I received this E-MAIL from the American Jewish Congress, 260 Madison Ave., 2nd Floor, New York NY 10016 United States , as Jew, I wanted to throw up: 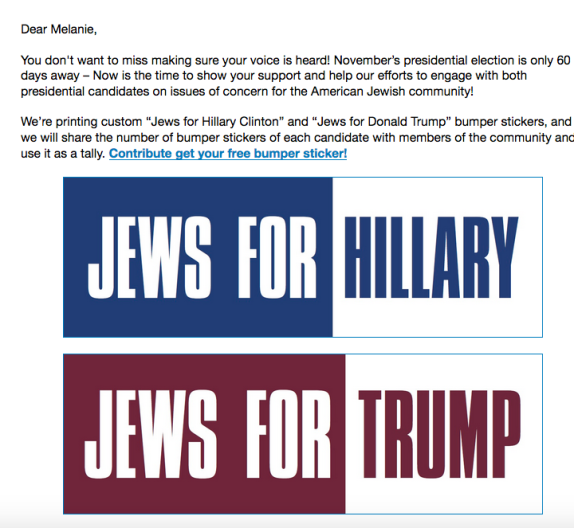 As soon as I received this I sent this  responsive message to AJC as follows:

I hope there is no such THING as Jews for Trump and am horrified that you lend his campaign any support at all.  Tantamount to Jews for Hitler – in my opinion. Sickening. This is not a usual campaign. It is NOT business as usual. Just because Donald Trump is the GOP candidate does not mean he should be supported as such. I will be unsubscribing.  THERE S NO EQUATING Clinton and Trump invoking the word “JEW FOR….”  – If this is a fund raising ploy – shame on you! Read this  it says enough for now:

We the undersigned are a group of American Orthodox rabbis, speaking as individuals, who have come together—in solidarity with other religious leaders—to make this statement on a matter of grave religious import.

We believe that religion should be lived in daily life and applied in the public square and in making policy judgments. We also believe that religion should be invoked with care because its tendency to judge matters in absolute or ultimate terms may interfere with the ability of the political system to work through partial steps, compromises and pragmatic accommodations. We also affirm that it is improper to claim that God or our religion is totally on one side, be it progressive or conservative. We affirm that people of good faith can come to contradictory conclusions on policy matters.

Nevertheless, there are times when the political discourse veers into morally offensive language and policy proposals that violate fundamental religious norms. In such cases, we feel that we must speak up—and as Orthodox rabbis in particular—since we believe that every action in life should be shaped and guided by our religious values.

We issue this statement on the heels of the week of the 9th of Av. On the Jewish religious calendar, this commemorates the anniversary of the destruction of the Second Holy Temple and the Great Exile—the greatest catastrophe of Jewish history until the Holocaust. The Talmud states that this disaster was a direct consequence of the release of gratuitous and unrestrained hatred into the body politic.

In the current presidential election, we have been deeply troubled to hear proposals that condemn whole groups and which are justified by pointing to evil behaviors by members of that group or religion. Wholesale condemnations—such as the proposal to ban all Muslim immigration into the United States—violate the principle of individual responsibility and violate the fundamental religious principle of “love thy neighbor as thyself”, which is one of the greatest commandments of Judaism (see Jerusalem Talmud, Nedarim 9:4). These proposals violate the biblical prohibitions to spread hatred or slander about groups and individuals and violate the oft-repeated biblical command to love the stranger.

We add that we were shocked by the disrespect shown to parents who suffered the greatest pain—losing a son who died in the service of our country. The Torah commands us always to comfort mourners. The fact that the parents criticized a candidate does not justify harsh and hurtful retaliation.

Similarly, we condemn the candidate’s remarks demeaning women, and we denounce his attacks labeling many Mexican immigrants as rapists or criminals. Again, opposition to immigration or to amnesty for illegal aliens cannot justify wholesale denials of the dignity of human beings or threats to round up and deport millions of families. These remarks and proposals are gross violations of the fundamental principle of our religion that every human being is created in the image of God and should be treated as equal, as unique, and as a person of infinite value and dignity.

Finally, we are troubled by candidates who signal authoritarian tendencies and pursue personal vendettas that come across as a dismissal of constitutional rights and legal processes. Protection of the law, equality before the law, and respecting democratic political processes (though they may fall into gridlock or frustrate us from time to time) are the bedrocks of democracy. Democracy is the system most protective of human dignity. Upholding it and protecting its processes is of the highest religious value. The fact that these dangerous tendencies have been coupled with statements of admiration for authoritarian dictators has aroused our conscience.

All these behaviors, taken together, have led us to make this extraordinary statement in the name of our religious principles. Our core religious values and essential theological beliefs require us to condemn Mr. Trump’s hateful rhetoric and intolerant policy proposals in the strongest possible terms.

What is also reprehensible is how American Jewish Congress (AJC) has tried to create a competitive atmosphere by pitting Hillary Jewish supporters against possible Trump Jewish supporters, with the idea that AJC will provide a tally as to how many of the Trump bumper stickers they have sent out versus how many Clinton bumper stickers are distributed.   Lets face facts – most liberals are probably not on AJC e-mail list – and with the perception of more Trump supporters – AJC is  in fact hurting the good name of those Jews around the country who regard Trump’s rhetoric as dangerous.

Mr. Jack Rosen: SHAME ON YOU – If you were concerned about Human Rights – you would not get involved in raising money through the promotion of Trump bumper stickers!