PEACHES TO HEADLINE THE 46TH ANNUAL SF PRIDE CELEBRATION  | TWO DAYS AND OVER 20 ENTERTAINMENT VENUES ARE PLANNED TO CELEBRATE THE DIVERSITY OF THE LGBT COMMUNITY, COMMEMORATE LGBT HISTORY AND EDUCATE ATTENDEES ON TOPICS OF RACIAL AND ECONOMIC JUSTICE 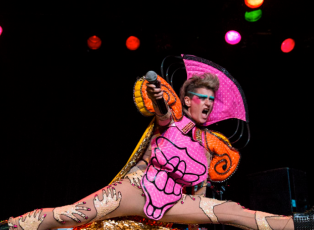 San Francisco, CA – SF Pride will culminate its 2016 Celebration at Civic Center with a performance by electropunk musician and performance artist, Peaches, on Sunday, June 26, 2016. On tour in support of her latest album, RUB, Peaches is well known for her provocative performances that blend electroclash, punk, alternative hip hop and synthpop.

“As an artist, Peaches is truly inspirational in her approach to gender and sexual identity, and we are so excited to have her headline this year’s Celebration,” said George Ridgely, Executive Director, SF Pride. “Additionally, we are proud to bring to the stage several dynamic speakers and community leaders who will address issues directly related to our theme, “For Racial and Economic Justice.”

The SF Pride Celebration is a two-day rally and festival that will be held at Civic Center Plaza in San Francisco on June 25 and 26, 2016. There will be more than 20 community-produced stages and venues throughout the festival, with the Main Stage sitting in the heart of the festival at the steps of City Hall. 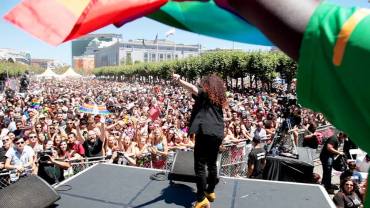 Speakers are planned for both days on topics related to SF Pride’s 2016 theme and to commemorate milestones in San Francisco’s LGBT history. Speakers include Kara Zordel, Executive Director of Project Homeless Connect; Bishop Yvette Flunder, founder of the City of Refuge United Church in Christ and The Fellowship of Affirming Ministries; and community leader and trans advocate, Clair Farley, Director of Economic Development at the San Francisco LGBT Center. A leader from the grassroots advocacy group HipHopForChange will address the audience on Sunday; and Dykes on Bikes is planning to make a rare appearance on the Main Stage as they celebrate their milestone 40th anniversary riding in the SF Pride Parade.

In addition to Peaches, Sunday’s line-up will also feature English experimental video art and music group, Psychic TV; international DJ, Hector Fonseca; international recording artist and local favorite, BeBe Sweetbriar; a morning dance party with Duserock and friends; CHEER SF; and a special tribute performance to Prince and David Bowie by Bluebird. Bay Area American Indian Two-Spirits will continue the long-held tradition of starting off the day with a blessing. Out and proud, Emmy-award winning Liam Mayclem will emcee the day with San Francisco hostess, comedian and performance artist Carnie Asada. Other performances on Sunday will include Z LaLa, Mix’d Ingrdnts and Breathless.

The final line-up for both days will be announced soon. Check sfpride.org for the latest updates.

Coolers, glass bottles and outside alcohol not permitted.

Along Market Street, from Beale to 8th Street

Information on participating in the parade, purchasing event tickets, advertising opportunities, or becoming an exhibitor, sponsor or donor may be found at sfpride.org or by calling (415) 864-0831.

The San Francisco Pride Celebration Committee is a 501(c)3 non-proﬁt organization founded to produce the SF Pride Celebration and Parade. The mission of the organization is to educate the world on LGBTQ issues, as well as commemorate the heritage, celebrate the culture, and liberate the people of all LGBTQ communities. A world leader in the Pride movement, SF Pride is also a grant-giving organization through its Community Partners Program. Since 1997, SF Pride has granted over $2.5 million dollars in proceeds to local nonproﬁt LGBTQIA organizations and organizations working on issues related to HIV/AIDS, cancer, homelessness, housing rights, and animal welfare. 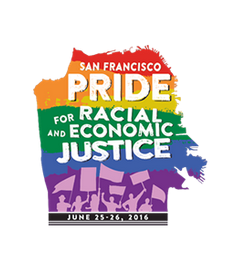