A Federal court has overturned the same-sex adoption ban in Mississippi, today.

Judge Daniel P. Jordan III of the United States District Court, for The Southern District of Mississippi, Northern Division ruled has ruled the ban on adoption by gay and lesbian couples in Mississippi, under Mississippi Code section 93-17-3(5) which states simply: “Adoption by couples of the same gender is prohibited,” is unconstitutional.

The case involved four lesbian couples residing in Mississippi and two advocacy groups, the Campaign for Southern Equality and Family Equality Council.   The plaintiffs challenged the statute that prohibited same sex adoption, under the “Due Process and Equal Protection Clauses”  of the United States Constitution. Two of the couples sought a private adoption involving the biological child of one of the partners. The others sought to adopt through Mississippi’s foster-care system.

In his ruling, Judge Jordan explicitly stated that the Mississippi law banning adoption by gay couples “violates the Equal Protection Clause of the United States Constitution.”

Roberta Kaplan, who successfully argued U.S. v. Edie Windsor before the Supreme Court, was the lead attorney on the case.

Mississippi is the last state to explicitly ban same-sex adoptions. 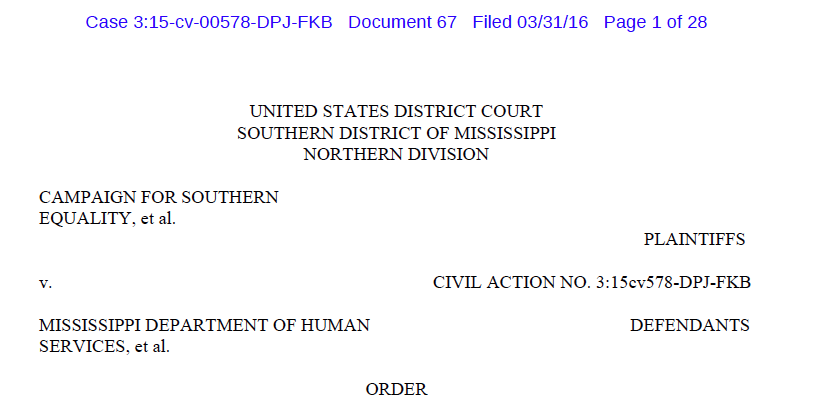