Today is Super Tuesday: Trump has a 30% share in the old Bank of America Building. Several activists stood outside the building and put Donald Trump on notice.  The police must have been warned by the landlords or management of the building about our impending presence, as more than enough security and press showed up to cover our intimate gathering. Several of us spoke about the harm Trump is causing with hateful rhetoric, including Jeffrey Kwong, who spoke on behalf of Asians Against Trump.

Melanie Nathan: My words at Today’s Presser outside Trump’s Building in San Francisco: 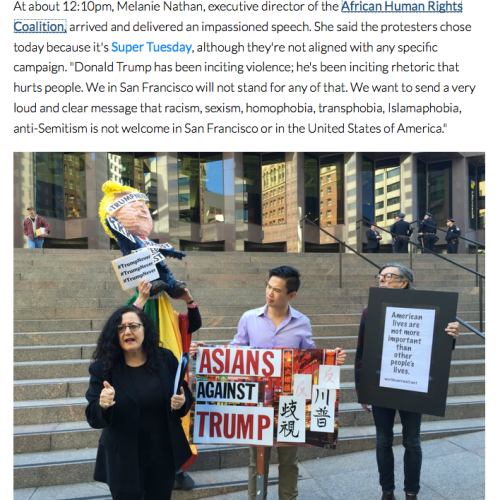 San Francisco is a proud city that stands for diversity – we are representative of all of America and the better part of what America stands for – equality and inclusiveness. We are ground zero for equality and inclusiveness and as we strive for racial, gender, sexuality, economic equality, fairness, and justice, we remind Trump that American values include acknowledging the simple truth that:

Anyone who antagonizes America to be hateful, to be unwelcoming, or to be fearful does not represent our values.

Mr Trump this is for you: The presence of the KKK at your rallies and as your endorsers speaks volumes.  You Donald Trump are the big attraction – it is YOU who has attracted the KKK.  Mr. Trump, I am a Jew who will NOT go back to Auschwitz, as suggested by supporters exiting your rally.  AND NO Mr. Trump my friends will not got back to Africa another suggestion by your supporters.  And NO Mr. Trump we will not subscribe to YOUR Apartheid America. The majority of us are better than that.

Here today we also have members of San Francisco’s LGBTQI community, who will not stand by and watch you applaud the attempted mugging of our rights.

Many of us are citizens who support new immigrants, to include refugees, asylum seekers, Muslims and Mexicans. On this Super Tuesday we speak out against – racism, homophobia, transphobia, anti semitism, anti-Islam and against the misogyny that Donald Trump is promoting.

On this Super Tuesday we stand outside the building that gives Mr. Trump a presence in our city, and so it is here that we denounce Donald Trump for attempting to divide our city and our country, along racial, religious, sexuality and gender based lines. Using these criteria to attract people to support his run for President of the United States, is reprehensible and will be defeated.

We are putting Mr. Trump on notice that San Francisco will not tolerate divisiveness and the inciting of violence.

Donald Trump owns this building.  If he cannot show respect for our diversity and our City, then he has no business being in it, under any circumstances.

We San Franciscans call upon Mr. Donald Trump and his family and his surrogates and his supporters to show citizens and all inhabitants of this great Country and our richly diverse City some basic respect.

This is only just the start of what San Francisco will do to ensure that bigots like Donald Trump and even Ted Cruz, who is caste from the same hate- mold, but a little more polite in his delivery, will never lead this country. 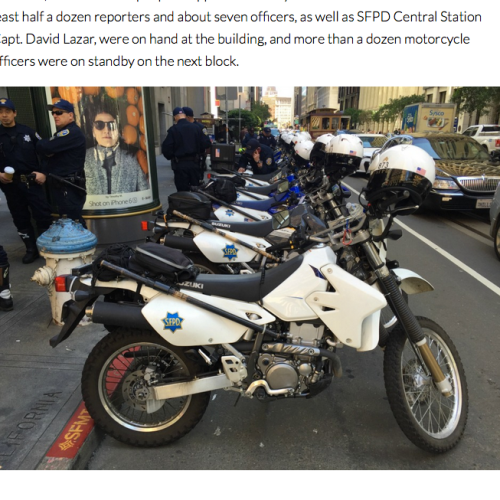