The South African Palm Ridge Magistrate’s Court has sentenced the brutal rapist and murderer of 26-year-old lesbian Duduzile Zozo.  Lekgoa Lesley Motleleng, who pleaded guilty to the rape and murder of the young lesbian, will spend 30 years in prison.

The half-naked body of  was found in Thokoza, Ekurhuleni, outside of Johannesburg, on a Sunday morning back in June 2013, in what was yet another case of the brutal hate crime, so called “corrective rape” and murder. (Case Reported on Oblogdee in 2013.)

Zozo’s grieving mother, Thuziwe Zozo, said at the time of the murder  that she suspected that her daughter was murdered because of her sexuality;  her assertion validated, when the Court specifically recognized sexual orientation as a motivating factor in this horrific crime.

According to Mamba Online “The judge expressed hope that criminals who aimed to “correct” lesbians would realise that members of the LGBTI community simply want to live their lives freely and to enjoy the same rights as everyone else.”

Now as reported by Mamba Online:  The prosecution described in court how Motleleng killed Zozo after she refused his advances and how she fought back and scratched him when he attacked her:

“After she drew her last breath, Motleleng went to a toilet where he took a toilet brush and returned to the scene of the crime to brutally shove it in her anus, thinking it was her vagina.

Zozo’s body was found in Thokoza, outside of Johannesburg, on Sunday 30 June. Motleleng knew Zozo and her family, was aware she was a lesbian and even attended a vigil in her honour before he was arrested.

As part of a sentencing agreement, he received 25 years in prison for murder and 25 years for rape.

According to the Forum for the Empowerment of Women (FEW), 20 years of the rape sentence will run concurrently with the 25 years of the murder, giving him a total prison sentence of 30 years.  READ MORE

FACE of the Rapist Murderer: 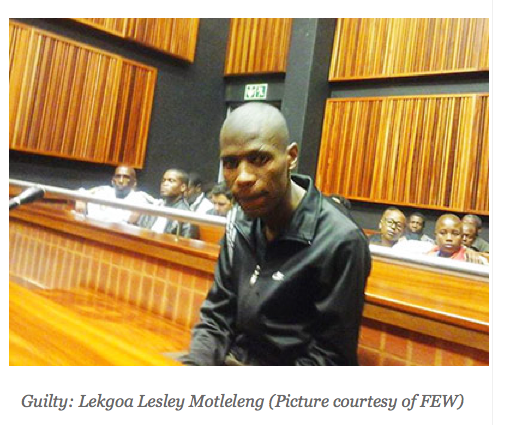 UPDATED Nov 26, 2014,  due to the sadly low presence of media we were only just able to receive this via transcript:

In his ruling, Judge Maumela said he wanted to make a difference to all vulnerable groups of society “in (his) own small way”. And this is what he told Motleleng during sentencing:

A reduced media presence witnessed these statements – the once-huge number of journalists who initially attended the proceedings having dwindled to only two.

Judge Maumela said a harsh sentence for the 23-year-old would serve as a warning to those who threatened the vulnerable. He said he hoped it would make these difficult lives easier. Judge Maumela told Motleleng to reconsider his attitude towards homosexual people while he served his sentence. “Lead your life and let gays and lesbians be.”

Prosecutor Mahlubi Ntlakaza said the case had sent a shock wave through the gay community.

In the plea agreement, Ntlakaza wrote that the accused had “transgressed not only the right to life, but also (Zozo’s) rights to human dignity, equality and freedom”.

The more than 50 activists who gathered outside the court on Tuesday seemed happy with Maumela’s acknowledgement of the plight of the LGBTI (lesbian, gay, bisexual, transgender/transsexual and intersexed) community.

4 thoughts on “Rapist and Murderer of South African Lesbian Sentenced”