“Quite frankly I am sick of hearing how ‘upset’ everyone is about this new law, while doing absolutely nothing to help our fellow LGBTI in The Gambia”

While Gay people from The Gambia are on the run, the U.S. State Department on Monday condemned the decision by Gambia’s president to sign the anti-homosexuality law imposing life imprisonment for some homosexual acts, doing very little else to help LGBT people in The Gambia.

President Yahya Jammeh has now signed the bill into law, adding yet another country to the current trend in Africa of stepping up anti-homosexuality legislation. 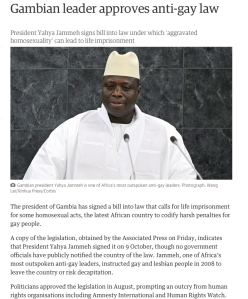 A copy of the legislation, obtained by the Associated Press on Friday, indicates that the law was signed on 9 October, though, according to AP, no government officials have publicly notified the country of the law. “Jammeh, one of Africa’s most outspoken anti-gay leaders, instructed gay and lesbian people in 2008 to leave the country or risk decapitation.”

Several LGBTI people in The Gambia have made direct contact with me.  They have been on the run for several months now, including a Gambian man who escaped to Europe and another currently in Senegal.  LGBT people are literally running for their lives and some are in hiding. From the direct information I have the United States Department of State and the relevant Embassies are not doing anything to help LGBT people from The Gambia.

One man I am in contact with in Senegal who wants to apply to UNHCR for refugee mandate and resettlement abroad, has been asked to report back to the Senegal Refugee Commission several times, without progress,  and will have another appointment this week. We will keep you posted.

However his ability to survive has been compromised by serious lack of resources and no preparation by any human rights group for this situation. He has had to rely on my Relief fund, which is now dry, and the extremely limited charity of a couple of friends for his survival.

Regarding current arrests of a 17 year old boy, four men and nine women in The Gambia:

“The suspects are the first to be arrested since the new law went into effect Oct. 9, the day President Yahya Jammeh signed it. Amnesty International last week accused Gambian security forces of resorting to beatings and the threat of rape and other abuses if they did not confess. Gambian officials have declined to comment on the new law or the arrests.”

As for the U.S. State Department – which noted:

“We are dismayed by President Jammeh’s decision to sign into law legislation that further restricts the rights of L.G.B.T. individuals and are deeply concerned about the reported arrests and detention of suspected L.G.B.T. individuals in The Gambia,” Rathke said, using an acronym that stands for lesbian, gay, bisexual and transgender.”

“Concern” is not enough – what are we going to do?  Unlike the Ugandans those in The Gambia are not engaged or organized as an activist community, and we need to take some emergency action from outside, – something different and innovative to help. While these laws are “sovereign” to the country, they are genocidal and egregious enough to warrant “special action.” There are no LGBTI organizational voices here in the USA doing anything to pursue something beyond the usual “we condemn” or “we are concerned.”

LGBT America, we are doing nothing as a community to provide direct humanitarian assistance to gay folk from The Gambia.

Quite frankly I am sick of hearing how ‘upset’ everyone is about this new law, while doing absolutely nothing to help our fellow LGBTI in The Gambia and other parts of Africa caught in the quagmire – laws that criminalize, resulting police brutality, arrests, evictions, banishing and firings.  I am also sick of hearing how much money organizations have raised for so called “global equality” and TV and Radio Shows to “change hearts and minds”, while at the same time people are actually running for their lives with no organization or campaigns seeking direct humanitarian help.    There is no organized LGBTI group or organization helping in The Gambia. There is absolutely no one there to help those facing arrest and community persecution.

At this time I am trying to provide direct assistance to 3 Gambian men in dire straits. If you are truly interested in helping, please donate to this campaign or find a way to provide your own direct assistance. THE RELIEF FUND:  https://www.indiegogo.com/projects/lgbt-africa-relief-fund-4–2/x/9186720   No amount is too small.