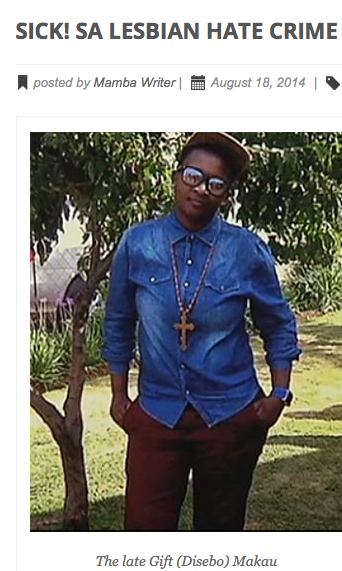 According to sources in South Africa and media reports another South African woman has been raped and brutally murdered in what appears to be another lesbian “corrective” rape, torture and murder.

The half naked body of Gift Disebo Makau was discovered in the Tshing Township, in Ventersdorp, in the North West province.

The exacerbated and untenable cruelty of the crime is apparent, as her body was found with a running hose pipe shoved down her throat and into her stomach.

As pointed out by Mamba Online and previously reported on this Blog:

“A number of previous attacks on LGBT South Africans have revealed a trend of a disturbing and brutal violation of their bodies.

In July last year, the body of 26-year-old Duduzile Zozo was found in Ekurhuleni near Johannesburg with a toilet brush rammed into her vagina. In June 2012, 24-year-old Thapelo Makhutle had his throat slit to the point of being almost decapitated in Kuruman. His genitals had been cut off and stuffed into his mouth.”

I have been reporting the rapes and murders of lesbians in South Africa for many years and have noticed an increase in the extent of the hate expressed through what appears to be a ‘ramping up’ of the torture and violation of the woman’s body.

Despite 20 years of democracy in the hands of the ANC, and a claim to a new post Apartheid South Africa, little has happened to quell attacks on lesbians.

The South African Task Team, of which I was a founding spokesperson, formed back in 2011, to fight such hate crimes, has yet to solve the problem, with education and awareness campaigns promised, but minimal.

One cannot fathom the cruelty and the barbaric nature of such an horrendous crime. One thing is clear, and that is that people have not caught up with the “openess” and “coming out” that an equality based constitution provokes.

Mamba online is reporting the case as follows:

According to media reports, the half naked body of Gift (Disebo) Makau was discovered in the Tshing location with a running hose pipe shoved down her throat and into her stomach.

It appeared that she had been raped and then strangled with a shoelace and a wire that were found around her neck.

There are conflicting accounts as to her age, which range from 18 to 24-years.

Makau’s cousin, Lucky Gaorongwe, told Times Lives that her family, to whom she was out, was devastated.

“Her mother is not coping at all, but we’re trying – and people have been supportive,” he said.

“She was a cool girl who was never violent. She enjoyed playing and refereeing soccer games in the neighbourhood,” he added.

Makau’s aunt, Mpho Gaorowuwe, told ENCA that she believes that the young woman was killed because she was a lesbian.

A 24-year-old man has been arrested in connection with the attack. He was set to appear in court today.

The DA’s National Spokesperson, Phumzile Van Damme, responded to the tragic news by announcing that the party will request a debate on the protection and strengthening of LGBTI rights when Parliament reconvenes this week.

During the debate, the DA will call for the roll-out of a nationwide public education campaign on LGBTI rights driven by the Departments of Education, Social Development, Police and Justice.

Van Damme said that the campaign must deal with “the ignorance and deep-seated prejudices” related to homosexuality. READ MORE