Today activists head to the White House to find out why…

Saturday night Vice President Biden spoke at the Los Angeles HRC Gala. During his speech he said that no employment protections for the LGBT community was “close to barbaric“. It’s one thing for the White House to try to heap all of the blame for that lacking on the do-nothing Congress, but we all know that 22% of America’s workforce could be protected today if Obama would just sign the federal contractor Executive Order (EO). So, why won’t he sign it?

The EO at this point is nothing more than a broken campaign promise from 2008. Strange since at this year’s State of the Union President Obama announced that due to lack of action by Congress he would be signing more executive orders. In fact, he has just signed the Executive Order raising the minimum wage for federal contractors, so why no LGBT employment protections too? 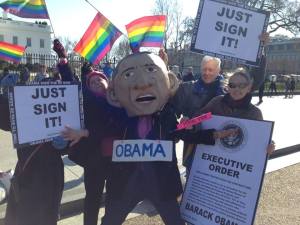 Biden’s “barbaric” comment about America’s lack of employment protections for the LGBT community came almost in the same breathe as his mentions of loathsome practices in other countries such as genital mutilation and so-called ‘corrective’ rape along with his complete lack of comprehension about Uganda’s ‘aggravated’ homosexuality. It seems like he is putting the lack of LGBT employment protection in the same category. And if Joe Biden gets it,  why doesn’t Obama?

This afternoon LGBT activists went to the White House to try to find out why. They also tried to persuade President Obama to sign the federal contractor Executive Order for employment protection for our community. Literally. With our own stand-in Obama. Also activists tried to ask the question of ‘Why’ and send the message of ‘We are tired of waiting’ to Gautum Raghavan the LGBT liaison in the White House Office of Public Engagement, so he could share it with the President but our email invitation to meet us at the fence went unanswered and security refused to take our gift-wrapped poster.

What will it take to get Obama to sign employment protections for the LGBT community? No one seems to know. Not even the smartest people in our movement. Not the political insider, nor the activist outsiders. 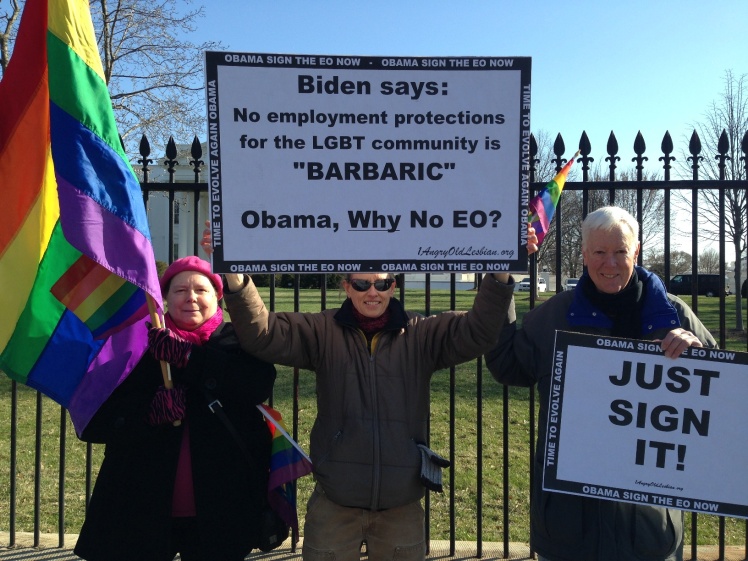 5 thoughts on “Biden says it’s Barbaric, so why no EO Obama?”