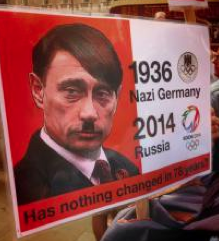 According to Media reports, Billie Jean King believes that standing up to discrimination is the best way to combat it, so she had no hesitation in joining the US delegation for the Sochi Olympics. I submit that it is how one stands up to it that determines the requisite impact.

King will help lead the delegation in the opening ceremony on February 7 at the Sochi Games, which has been overshadowed by a recent anti-gay law in Russia, calls for a boycott and criticism from human rights groups. “It took about 10 seconds,” King said this week about deciding to go to Sochi.

“It sends a strong message that America is very diverse. We are here, and surrogates as athletes and gay athletes. I thought it would be sweet to wave some flags or something. But they can get in big trouble and have their medal taken away and also be sent home… We reflect part of America. Maybe we’ll be a voice for people who don’t feel they can be a voice yet.”

I could not disagree more. The Russians know we are diverse. That’s not news! We do not need to go to Sochi to tell them that.  And they abhor it. They abhor homosexuality and many are Nationalists. The masses that support Putin and the anti-gay laws do not care about diversity and have no qualms about laughing at it in our American faces. 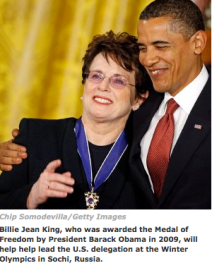 In fact if  Ms. King were to read the myriad of comments that I have allowed up on this very BLOG from those forming a vast group of Russians who support the torture and persecution on Gays in Russia and who express their disdain for homosexuality, she will see that no amount of “Hello we are here and we are queer” and rainbow flag waving will change their stance.  It is short sighted and unproductive for Ms. King and her band of three to think that they are doing anything more than delivering to Putin an anti-gay victory. They are playing right into his hands.

When they leave Russia, nothing will change and they will have made fools of themselves for attending at all. And most importantly to note, is that  gays, lesbians, bisexual, transgender and intersex Russians will continue to be torured and persecuted. The laws outlawing their sexuality and existence will increase and things will get worse for them.

Nothing short of full boycotts will accomplish anything. The only way to send a message to Putin is not to show up. Why would LGBT Americans want to deliver anything short of the ultimate message? More self marginalization? Personally I am sick of playing footsie with those who diminish us. With those who have no respect for us. And yet Billie Jean King and the others attending as part of the delegation are now participating in this self marginalization, like it or not.

As I have noted before, using the example of Apartheid and the boycotts of South African sports and athletes, no amount of “look we are black and we are here”  delegations to South Africa would have changed the Afrikaner Apartheid mindset. It took boycotts and sanctions for that to happen.

I believe Ms. King would have made a much bigger statement had she turned down the appointment to the delegation with a comment such as “In supporting the persecuted Russian LGBT community, I refuse to set foot in Russia until the Anti-Propaganda law is repealed.”  This would have had a much greater impact than the puny response of showing up in Russia to say ‘we exist and we are diverse.’ They know that and they have stated over and over again all over the internet and in many venues that they do not care how we conduct ‘our sordid lives in our own countries,’ that they do not want homosexuality in Russia.

Again any self respecting LGBT person from the West ought to have the balls to defy Putin by refusing to participate in the Sochi games.

Its is also interesting to note that the U.S. State Department, since appointing this gay delegation has issued an advisory for Americans tot be aware of the Anti-Gay laws, submitting that those who defy the ill defined law could land up in jail and paying fines.   So how exactly does Ms. King propose she is going to promote her gay / lesbian self for all to see – her mere presence?

As to Ms. King, my final thought and message:

There is still time Billie Jean – you can look into this more and make a much bigger impact than you are currently proposing by announcing your withdrawal on the basis I have suggested – unless of course you are willing to risk arrest and stand on the roof of the Kremlin to scream for the repeal of the law – now that may be worthy!

The United States State Department has issued a travel advisory warning Americans of the dangers in attending the February Winter Olympics in Sochi, Russia. READ MORE