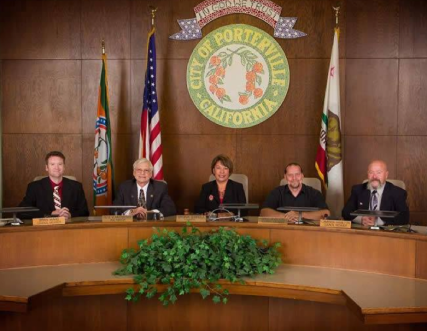 On June 04, 201, Mayor Virginia Gurolla of Porterville, issued proclamation recognizing the month of June as Pride Month in Porterville.  A month later the City Council members  voted to rescind the proclamation.  When the vote passed, in act of civil disobedience, Jennifer McGuire, a housewife and local equality activist was arrested with 2 other activists, who voiced their disdain at the actions of the City Council.  Mcguire had stood bravely in the face of the homophobic threats and the odious nod by Porterville’s City councilors.

However according to her, she was not the bravest person in the room:-

The room is the City Council chambers of Porterville, on July 16, 2013, and it’s standing room only.  There’s a feeling of tension that is palpable.

He is 17. He is very cute. He is wearing a rainbow bracelet shaped like a bow tie. I want to hug him. He is gay. I know he is gay because he stood up during oral communications and came out. He came out for the first time in public. He came out to the community in which he lives. He came out, unintentionally, to his family. He stood in front of a room full of people, half of which were expounding hatred and lies; in front of the council, of which 3 members were openly ridiculing his personhood; in front of news cameras and journalists and law enforcement and, thankfully, the part of the audience who were his friends and supporters of LGBTQ persons, and he came out. He shared his fear and frustration and heartbreak of being a gay teen in Porterville. He shared his story of harassment, of being bullied, of being afraid to walk down the street and of a system that wouldn’t (not “couldn’t”) protect him in the places he should feel safest – in school, in church, at home, in his community.

He shared his determination to leave, to never return to the place that was supposed to be home. I share his sentiment. I am hoping this is my last visit to Porterville.

I live in Visalia, a mere 30 miles away, and yet it feels like I enter another country every time I come here. This is my 3rd Porterville City Council meeting in less than 2 months. My first city council meeting was to be a celebration! For the first time, the mayor of Porterville signed a proclamation that June 2013 would be LGBT Pride Month, just as President Obama had for the nation, Governor Brown had for the state, and even Visalia had for my city along with hundreds of other cities across the country. Many of us were there to congratulate friends and local LGBT community leaders. A public recognition, a statement of acceptance and tolerance, was long overdue.

Porterville has a long history of anti-LGBT issues – from being the only city in the state to pass a resolution in support of Proposition 8 to openly ill treatment & harassment of LGBT community members and even public statements by city leaders condemning LGBT persons. We anticipated some opposition, but this seemed to be a moment of triumph. The proclamation was signed, it was a done deal, and finally, there seemed to be an opportunity for inclusiveness and healing in this very torn and divided town.

I want to stress this – the city of Porterville was already torn and divided between inclusion and diversity and fanatical religious groups. This was not “new”, nor because of the proclamation. The first and second city council meetings quickly devolved into verbal mayhem, with some fanatical members of the Porterville “Christian” community calling for the deaths of LGBTQ persons, blaming LGBTQ persons for everything from diarrhea to natural disasters to unwanted pregnancies, and residents and council members calling for the recall of the proclamation and the Mayor.

The third meeting was a showdown of Oater proportion. Emboldened by the recent SCOTUS rulings and Pride month celebrations all over the state and country, we LGBTQ persons and our allies were hopeful that right would prevail, that the city council would finally realize that we are a vital and integral part of the community, of ALL communities. We hoped the council would understand that our “difference,” our diversity, adds to the fabric of the city, to ALL cities. We believed they would see our inclusion as a step towards the future, towards understanding, towards making Porterville the type of place its young people wanted to stay, not run away from screaming. 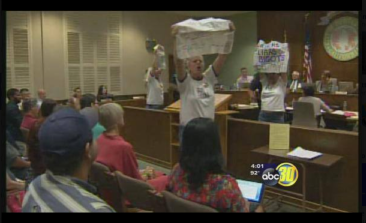 We were also realistic and understood the political make-up of the city council. As hopeful as we were, we knew the proclamation, a simple statement that LGBT persons exist in Porterville and contribute to the community, would be rescinded. After over an hour of community input, split almost evenly for & against, the proclamation was rescinded by a 3-2 vote of the council. It was a mean-spirited act, pure and simple. June was already past. The proclamation didn’t hurt anyone. The only reason to take this EXTREME action was to slap the LGBTQ community in the face. And while I believe in “turning the other cheek,” I also believe that an EXTREME action requires an EXTREME reaction.

The moment the votes clicked onto the video monitor, I and three others, supported by cheers from the crowd & littered with insults and obscenities, rushed to the front of the chambers with signs and chants of outrage. Within seconds we were forcibly removed from the room by police. We were arrested, charged, booked, and finally released the next day. What will be the outcome of this arrest, I do not know, but our court dates are in a couple weeks.

I am not ashamed of nor apologetic for my arrest. This offense could not go unanswered. For me, it was proof that over 5 years of hard work by local LGBTQ persons and allies working within the system was being shot to hell. These people spent hundreds of hours, countless tears, and I am sure endured horrible consequences that I can only imagine, just for trying to be a part of this town, a part of this community and trying to change the “hearts and minds” of its city leaders and the community at large. They were trying to work towards inclusiveness and still, they were being beaten down.

Realistically I know that in today’s two second headline world that Porterville is already an “old” news story, but it was, and is, a story. Thousands of people all over the country have now heard of Porterville and were outraged by the actions of the city council. And maybe one LGBTQ person in a “Porterville” somewhere else will know that as hard as it is and as painful as it is, there is love and support and acceptance, and many, many people are working and standing and screaming for them and with them, and maybe that will help them change their “Porterville.”

The heroes of this story are not those of us who got arrested, but the young man who came out, and I hope he knows I am proud to stand with him, and I am proud to stand up for him. The heroes are the local LGBTQ community members who have been waging this fight day in and day out for years.

Above Jennifer McGuire of Visalia,  LGBTQ activist, and a volunteer with The Trevor Project.

Above Right City Council with Mayor in Center.