For the first time since that brief moment in 2008,  all Californians are able to marry.  Yesterday, with mere minutes notice, same-sex couples converged on San Francisco City Hall, as word spread through social media that the Ninth Circuit had lifted the stay on California marriages.

The swift move to reinstate the inherent marriage rights to same-sex couples came after Attorney General Kamala Harris ensured that the Ninth Court acted urgently and that the court order lifting the stay received its well deserved swift implementation.

And who better to be first married than Kris Perry and Sandy Stier, two of the Prop 8 Plaintiffs.

The marriage stays were lifted after the Supreme Court of the United States dismissed the Perry v. Hollingsworth case on the basis that the Defendant’s had no standing. 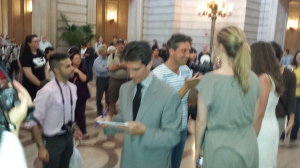 I rushed down to City Hall as soon as we heard the news with our filmmaker for GAY U.S.A. the Movie, which I am co-producing and we filmed the Plaintiffs at City Hall. After the Plaintiffs were married by the Attorney General, City, State and County officials showed up to be on hand to marry the many ecstatic couples.

Amongst the officials was State Senator Mark Leno who was on hand to marry couples. The late afternoon flow was filled with love and happiness as many of the pictures on the BLOGS reveal.

What was so amazing is that people dropped everything and ran down to City Hall including the San Francisco Gay Man’s Choir, which showed up in force to sing to the Plaintiff couple. People were dressed as if they had run from their poolsides or just left the beach – and there they were – casually dressed – yet just content to have that chance to be married, many having waited many years.

Crowds formed in circles around couples being married at various parts of the Rontunda, as TV crews, photographers circled around each couple for that shot of the day. 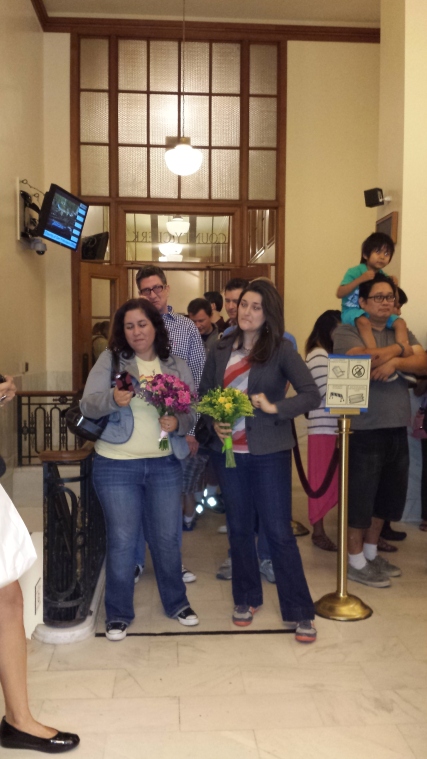