Were they murdered for being gay? A picture of a beaten dying teen, a picture of a Nazi-like flag – and in between a Game Ranger Camp to make “Moffies” into men

Look at this photograph and imagine a 15 year old effeminate teen being sent” by his mother to a “Ranger Training Camp”  run by a right wing militia type,  and then showing up in a hospital bed looking like this, hooked up to life support. That is was what happened to Raymond Buys and he died two weeks later. He was emaciated, dehydrated, with injuries including several skull fractures, and cigarette burns all over his body.

Alex de Koker, the owner of  Echo Wild Game Rangers, a camp in the bush, one hour south of Johannesburg, charged $2,000 ($22,000) per month for his course, where he assured parents he could  help teens to ” man up.” Three teens are known to have died.

Buys was sent to the camp by his mother, Wilma Buys, because she thought “this course to make him a better man, to give him a better future.”

However with a little bit of digging, the gay reparative undertones would start to emerge.  de Korker 49, and his employee, Michael Erasmus, 20, have been charged with and pleaded not guilty to the 2011 murder. Charges include  child abuse, neglect and two cases of assault with intent to cause serious physical injury.

The trial began in the Vereeniging District Court this past week.   The Court heard about the alleged torture that led to Buys’s murder. Gerhard Oosthuizen, 19, reportedly testified that Buys, with whom he shared a tent during the training course, was chained to his bed every night, was refused permission to visit the toilet and forced to eat his own faeces. According to Die Beeld Newspaper, Oosthuizen told the court that Buys was extremely weak and unable to do the manual labor the boys were forced to perform. Buys was often beaten with planks, hosepipes and sticks when he did not do his duties properly, Oosthuizen said.

Shortly before Buys was admitted to hospital, Oosthuizen reportedly saw De Koker and Erasmus electrocuting Buys, who was naked and tied to a chair.

“He screamed… I was scared and ran away.” Buys was later brought back to the tent and chained to his bed. The cross-examination of Oosthuizen is expected to begin on Wednesday.

What is so shocking is that the murder of Buys is not the first, as Echo Wild Game Rangers has seen the deaths of 2 young teens, also perceived as gay and clearly effeminate, when in  2007, 18-year-old Eric Calitz and Nicolaas van der Walt, 19 both died in similar circumstances.  de Koker was handed a suspended sentence in 2009 over Calitz’s death but escaped charges for van der Walt’s death, which was ruled to have been caused by a heart attack. It was reported that de Koker told Calitz  that he wasn’t a “moffie” (like saying “fag”) and he “would make a man out of him.” 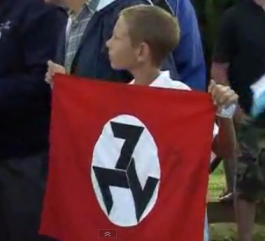 The idea of the camp is to apparently make men of teens and to “cure”  ‘”feminine traits’ in male youths…” another way of saying gay reparative therapy, instead in this instance that therapy involved “beating the gay out of the kid” – torture and if torture didn’t effect the desired change, then certainly murder would; after all a dead teen is not a gay teen.

Right wing anti-gay bigotry abounds in South Africa. As it happens de Korker was reportedly a member of the extreme right wing AWB / Iron Guards movement, which had been headed by controversial murdered white supremacist Eugene Terreblanche. The Afrikaner Weerstandsbeweging (Afrikaner Resistance Movement AWB / Iron Guards movement is a far right white supremacist group who fly a flag with a Nazi-like death head skull centered over the “Three Sevens” symbol.  A former paramilitary group in South Africa, the AWB claims that the three sevens symbolized supremacy over the devil. They are committed to the restoration of an independent Boere-Afrikaner republic or “Boerestaat” within South Africa. They do not tolerate gays and believe in absolute gender conformity.

It will be interesting to watch as the trial continues, to see how much of the ” beating the gay out of teen”  factors into the evidence and establishing of motive. Was this in fact a hate crime – against gays, for the perception and use of rhetoric in the beatings?  While South Africa, a country with full LGBTI equality,  does not have homophobic violence as designated hate crimes in their statutory law, this aspect may still  go to motive. The exposure of the ideology while it may not feature in this case, certainly ought to. There is also no confirmation that these young men were in fact gay. However in the culture, if one is effeminate, then one is automatically perceived as gay.

UPDATED April 29, 2013.  OBLOGDEE  found out from sources in South Africa that de Koker tried to get married while incarcerated, pending trial in this murder. His plans were cancelled as the warden informed him “I am not a wedding planner.”  We also found out that the Camp was never officially registered to train youngsters as game rangers and the certificates offered were phoney and a ploy.   It is alleged that the young men at the camp were used for forced hard labor.

In 2007 after the first murder, de Koker was tried and received an unknown suspended sentence for the “murder” – it has been difficult to establish what the actual guilty verdict rendered as the sentence for the 2007 crime, seems very lenient. Notwithstanding his suspended sentence, for a murder occurring at his camp, and notwithstanding police suspicion that he was operating a right win militia group, he was allowed to continue to operate his camp, leading to the death of yet another teen. There seems to be evidence of cover up or failure of the South African authorities to keep an eye on a very dangerous individual.

The trial has been postponed until the end of May. de Koker and Erasmus remain in custody. We will keep you posted as more unfolds.

By Melanie Nathan, nathan@privatecourts.com
Cathy Kristofferson contributed to this article.

NOTE from Melanie:  Thank you to all the BLOGS who picked up this story and for quoting me as well as providing the appropriate credits. I would like to say that nowhere has it been stated that these teens were in fact GAY. However they were perceived as Gay because they were effeminate and also because the accused murderer referred to them as “Moffie” which means fag. But we cannot say they are “GAY”. Hence those who quoted GAY STAR NEWS as their source should know that the header “GAY TEENS” including HUFFPO which followed Gay Star News are reporting inaccurately.

Alex de Koker and Michael Erasmus were found guilty of murder, child abuse and assault with intent to do grievous bodily harm, by the Vereeniging Regional Court in South Africa, today. By Melanie Nathan, February 27, 2015. Finally, after years of uncertainty and trial, Alex de Koker and his henchman Michael Erasmus were found guilty … END_OF_DOCUMENT_TOKEN_TO_BE_REPLACED

By Melanie Nathan, June 19, 2013. Today, in Vereeniging, South Africa, the ongoing murder trial of the owner of Echo Wild Game Ranger Camp, Alex de Koker, 49, and his co-accused, Michael Erasmus (20) was postponed yet again,  due to the accused murderer’s inability to pay his legal fees resulting in the withdrawal of his …

COURT ON MAY 30 – Killer De Koker (right) allowed to marry Marais, moments after testimony in the death of Raymond Buys, on life support for 2  weeks after torture at the hands of de Koker By Melanie Nathan, May 30, 2013. Compare the two photos. One is the victim photographed in his hospital bed, … END_OF_DOCUMENT_TOKEN_TO_BE_REPLACED

Accused murderer fears for his life in prison after assault By Melanie Nathan, May 28, 2013. The trial of the Afrikaner right wing extremist, accused of murdering  a young man who was sent to his camp to “man up” commenced in Vereeniging, South Africa, yesterday and is set to continue through the next few days, … END_OF_DOCUMENT_TOKEN_TO_BE_REPLACED

Andre Bekker, Richard Cohen and Christopher Doyle | While their modus operandi may be different to accused murderer de Koker, their ideology stinks the same stink! By Melanie Nathan, May 01, 2013. A South African, Andre Bekker, who proclaims to be an  ex-gay and an authority on converting gays,  teamed up with tired extremists in … END_OF_DOCUMENT_TOKEN_TO_BE_REPLACED

Were they murdered for being gay? A picture of a beaten dying teen, a picture of a Nazi-like flag – and in between a Game Ranger Camp to make “Moffies” into men By Melanie Nathan . April 25, 2013. Look at this photograph and imagine a 15 year old effeminate teen being sent” by his mother … END_OF_DOCUMENT_TOKEN_TO_BE_REPLACED 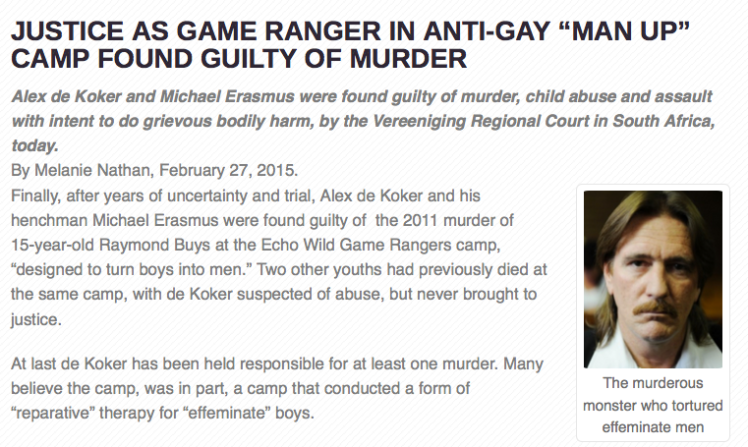