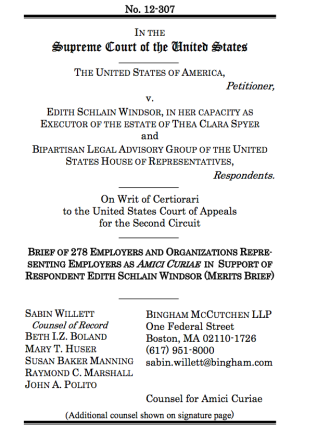 A team of Bingham McCutchen lawyers today filed on behalf of 278 businesses, cities, and other employers and employer organizations an amicus brief in United States v. Windsor, the United States Supreme Court case concerning the constitutionality of the federal Defense of Marriage Act (DOMA). The brief, a copy of which is attached, argues from the point of view of the employer that the law’s prohibition of federal recognition of lawful marriages between same-sex spouses creates a variety of hardships in the employer’s effort to administer tax, benefits and other HR matters, and in efforts to foster workplace morale.

See the Brief and full list on GAY U.S.A.  the Movie’s BLOG at http://gayusathemovie.com/2013/02/278-employers-file-amicus-brief-in-scotus-doma-case-in-support-of-marriage-equality/