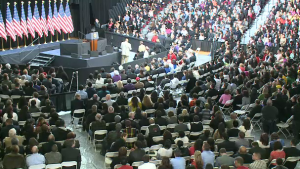 A path to citizenship for all, if Obama’s plan is followed and the  U.S. Congress includes binational same-sex couples.

Today, President Barack Obama announced his support for comprehensive immigration reform that would establish a path to citizenship for undocumented immigrants and make it possible for US citizens in same-sex, binational marriages to sponsor their spouse in the United States.

Although President Obama left binational same-sex couples out of his speech today, he has included mention of same-sex binational couples in his written propsal. The question remains whether or not the Bipartisan group headed by Sens. Chuck Schumer and McCAin will include the Obama proposal suggestion in their negotiations and the subsequent legislation. Thus far binationals have been excluded from the bipartisan plan and Senator McCain spoke out saying Gays are a red flag and not of paramount importance.:

“Keep Families Together. The proposal seeks to eliminate existing backlogs in the family-sponsored immigration system by recapturing unused visas and temporarily increasing annual visa numbers.  The proposal also raises existing annual country caps from 7 percent to 15 percent for the family-sponsored immigration system.   It also treats same-sex families as families by giving U.S. citizens and lawful permanent residents the ability to seek a visa on the basis of a permanent relationship with a same-sex partner. The proposal also revises current unlawful presence bars and provides broader discretion to waive bars in cases of hardship.”

“We applaud President Obama’s comprehensive approach to immigration reform. The president’s plan would end the cruel practice of separating same-sex binational couples. His plan also outlines a path to citizenship for undocumented immigrants, including LGBTQ immigrants.

“There are an estimated 36,000 binational, same-sex couples living in the United States, and half of them are raising children together. These couples face harsh choices if the spouse who is not a US citizen loses their student or worker visa and must leave the United States. Under the Defense of Marriage Act (DOMA), even those same-sex binational couples who are legally married cannot stay together because DOMA prohibits US citizens from sponsoring their same-sex spouses who are not US citizens.

“President Obama’s plan would also permit undocumented immigrants, including those who are LGBTQ, to pursue a legal path to citizenship. This is a critical reform necessary to ensuring that all residents of our Commonwealth and our country are equally valued and able to live safe, authentic lives.”

“I commend President Obama for a comprehensive and inclusive proposal to solve some of the most vexing issues in American society.  For 11 million immigrants who are stuck in the margins of the law, for tens of thousands of bi-national LGBT families caught in immigration purgatory, and for the many seeking to make an honest go at the American Dream, these principles of immigration reform are tremendously important.  What is clear is that U.S. immigration policies must be drastically overhauled to ensure that they always support stable families, strengthen communities and local economies, provide labor and jobs without exploitation, and, above all, are fair and non-discriminatory.  I welcome this framework and look forward to working with my colleagues in Congress to pass meaningful and inclusive comprehensive immigration reform.”

America’s immigration system is broken. Too many employers game the system by hiring undocumented workers and there are 11 million people living in the shadows.  Neither is good for the economy or the country.

It is time to act to fix the broken immigration system in a way that requires responsibility from everyone —both from the workers here illegally and those who hire them—and guarantees that everyone is playing by the same rules.
President Obama’s commonsense immigration reform proposal has four parts. First, continue to strengthen our borders. Second, crack down on companies that hire undocumented workers. Third, hold undocumented immigrants accountable before they can earn their citizenship; this means requiring undocumented workers to pay their taxes and a penalty, move to the back of the line, learn English, and pass background checks. Fourth, streamline the legal immigration system for families, workers, and employers.
Together we can build a fair, effective and commonsense immigration system that lives up to our heritage as a nation of laws and a nation of immigrants.
The key principles the President believes should be included in commonsense immigration reform are:

Cracking Down on Employers Who Hire Undocumented Workers