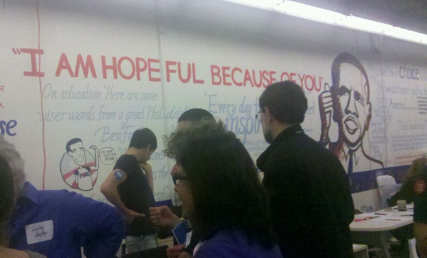 As the roar reverberated through the Democratic Party headquarters in the Castro, the San Francisco Mayor’s Party seemed like the place to leave, as thousands spilled spontaneously out of homes, restaurants and bars onto a closed off Castro Street, to the chant of “four more years.”

President Barack Obama has been elected to another four years in the White House and we have a shot at furthering our LGBT quest for equality.

Harvey Milk Square bore witness to joyful tears as San Francisco’s gay community celebrated the President’s re-election, realizing that the alternative in a right wing Romney/Ryan would have been just too cruel to contemplate.

This night could not have yielded more to a community that remains marginalized and second-class citizens. Now we truly have hope. We have re-elected a President who believes that we are indeed entitled to parity under the law, who believes in our constitutional right to marry anyone who we love and who has not been afraid to say it.

My Friend Madison wrote on my Facebook page – “Melanie, in one waving of His hand, God has passed marriage equality in Maine and Maryland, raised up the first open lesbian U.S. Senator Tammy Baldwin, and blessed West Virginia with its first openly gay legislator, Stephen Skinner!!! And I’m sure there’s more miraculous news on the way. READ More ” http://gayusathemovie.com/2012/11/obama-re-elected-in-the-night-gay-america-won/