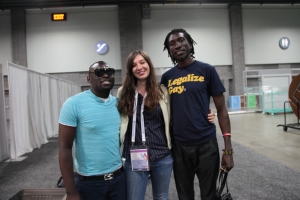 In addition to this BLOG, Editor Melanie Nathan contributes to other BLOGS, such as The Advocate, LGBTQ Nation, GAY STAR NEWS and others; and much of her writing about U.S.A. equality news can be found in her BLOG at GAY U.S.A. the Movie, which she is co-producing with filmmaker Kristina Lapinski.  Lapinski can be seen in this photograph with two participants in the film, Long Jones, from Uganda, who appeared in the film “Call Me Kuchu” and AUF who is living in Europe as an asylee from the Ugandan persecution he suffered for being gay.  Here is some catch up news from Gay U.S.A. the Movie’s BLOG:_

An anti-gay activist and former teacher and youth volunteer, Caleb Hesse, 52,   who owns the website protectmarriage.com, detailed by conservativebabylon.com, which is a front used to collect donations for the “proposition 8 defense fund,”  admitted today to molesting young boys over a period of decades.  Proposition 8 was a ballot measure that sought to […]

That Numbers do not lie and she is mere points away from defeat By Melanie Nathan, August 22, 2012. Michelle Bachmann is the Minnesota Congressional representative for the 6th District, who has made her hateful anti-gay position very clear.  Her unusually poor performance in last week’s GOP primary and her sinking approval rating, which show […]

Members of the LGBT community and their allies will protest at the opening of the new San Jose Chick-fil-A on Thursday, August 23rd at 6:00PM. Chick-fil-A’s charitable arm, the WinShape Foundation, has given at least $5 million since 2003 to anti-gay organizations, including almost $2 million in 2010 alone.  These donations help fund groups that […]

Thanks to our friends at Purple Unions and Gay Marriage Watch for keeping us in the loop with a collection of LGBT related articles from around the BLOG world. USA: Poll – 93% of Urban Liberals Favor Marriage Equality, 94% of Tea Party Members Oppose It (Think Progress) A new Washington Post poll provides some […]

The Democratic Party’s Platform Committee unanimously approved language expressing support for marriage equality at its meeting Saturday in Detroit, sending the proposal on for ratification at the national convention next month in Charlotte, N.C. A DNC source told The Advocate that the full committee accepted the language revealed on Thursday without controversy, and approved an amendment […]

GAY U.S.A. the Movie Congratulates Ugandans on  Success of Historic gay Pride events through Melanie Nathan’s article in The Advocate,  August 08, 2012. While the Anti-Homosexuality Bill from David Bahati languishes in Uganda’s Parliament, LGBT activists dared to declare their pride in public events this weekend. After months of preparation, and despite arrests, Uganda’s gay […]

Some interesting articles thanks to our friends at GAY MARRIAGE WATCH Welcome to the Gay Marriage Watch daily summary of the latest marriage equality news, with links to each of our posted articles. To see the whole blog, click here: www.purpleunions.com/blog Australia: Kevin Rudd Says PM Gillard Used to Support Marriage Equality (The Age) Three […]