Senator Scott Wiener (D-San Francisco)’s legislation to provide refuge for trans kids and their families, Senate Bill 107, passed the Assembly Public Safety Committee by a vote of 5-2. SB 107 will protect trans kids and their families if they flee to California from Alabama, Texas, Idaho or any other state criminalizing the parents of trans kids for allowing them to receive gender-affirming care. If these parents and their kids come to California, the legislation will help protect them from having their kids taken away from them or from being criminally prosecuted for supporting their trans kids’ access to healthcare

“The criminalization of trans kids and their families is horrific, and California will not stand idly by while this happens,” said Senator Wiener. “We can’t let bigoted extremists take us back to the era when it was illegal to be gay and trans. SB 107 will help protect trans kids, their families and their doctors, and make sure they can come to California if they want to live safely. It’s sad that it has come to this, but California will always have trans kids’ backs.”

This legislation has inspired 19 other states to introduce similar “trans refuge state” bills, as trans kids and their parents are currently under assault by executive and legislative action in Texas, Idaho, Louisiana, Arizona, and other states. For example, under far-right, anti-LGBTQ Governor Greg Abbott, Texas began investigating, and potentially prosecuting, parents of trans kids who receive gender-affirming care.

Governor Abbott also directed state agencies to consider removing trans children from their parents and placing them in foster care. While Governor Abbott’s directive was temporarily placed on hold by a state court, the state is appealing that ruling. Similarly. Alabama enacted a law to put parents and physicians in prison for up to 10 years for allowing or providing gender-affirming care to trans kids.

Given recent trends in anti-LGBTQ and anti-abortion legislation, other Republican-controlled states no doubt will pursue similar legislation and executive action.

1) It prohibits the enforcement of a law of another state that authorizes a state agency to remove a child from their parent or guardian based on the parent or guardian allowing their child to receive gender-affirming health care. The bill would prevent California’s law enforcement from cooperating with any individual or out-of-state agency regarding the provision of lawful gender-affirming health care performed in this state. As a result, families will be able to come to California to avoid having their trans children taken away from them.

3) It prohibits the arrest or recognition of any demand for extradition of an individual that criminalizes allowing a person to receive or provide gender-affirming health care where that conduct would not be unlawful under California’s law. It will declare that it is California’s public policy that any out-of-state criminal arrest warrant for someone based on violating another state’s law against receiving gender-affirming care is the lowest priority for law enforcement in California.

Trans youth already face numerous barriers to receiving the health care they need. Studies have shown that access to gender-affirming care for trans kids reduces risk for depression, psychological distress, and suicidal ideation. The criminalization of trans children and their parents leads to increased mental health issues and even suicide.

With SB 107, California will continue to be a leader in protecting the civil rights and basic dignity of LGBTQ people and will help trans kids and their parents have a safe place to go if they are threatened with prosecution or criminalization for being who they are and seeking the care they need.

Melanie Nathan, ED African HRC: “When it becomes the duty of a State to rescue people from another State, through refuge related laws, the impact of State imposed criminalization, when it breaches basic human rights, glares with great shame….. Shame because the criminalizing States are turning their own citizens into refugees. The Abbots and DeSantis of the world flagrantly breach human and civil rights in their attempts to deny freedoms – that people and parents have an absolute right to agency over their own bodies and that a parent cannot be robbed of their right to make decisions in the best interests of their children.” 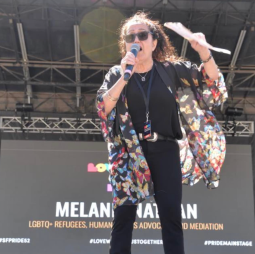