The popular Robert Kyagulanyi,  opposition Member of Parliament (MP), otherwise known as Bobi Wine, who is running for President opposing Ugandan dictator Yoweri Musevni, was arrested today, yet again. He has been detained at Nalufenya Police station and charged with an act likely to cause the spread of an infectious disease. The allegation is that the mass political rally endangered the lives of the “hundreds” of supporters attending. Bobi Wine has been arrested many times previously, constantly harassed every time he held a rally, or meeting, long before COVID 19 appeared on the continent. 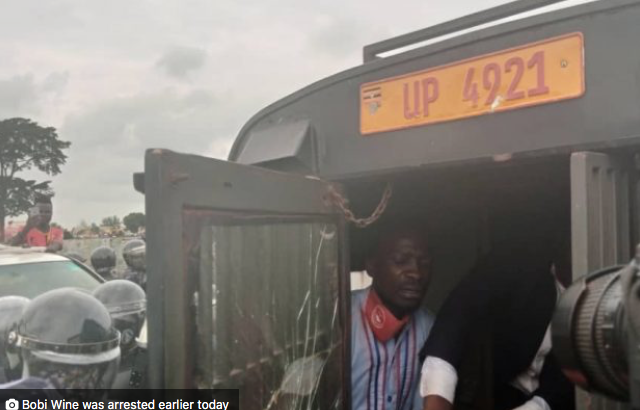 Nation Unity Platform Attorney, Muwada Nkuyingi, reports that he was denied a access to his client, Bobi Wine by police authorities, apparently on the instruction of one Frank Mwesigwa. This is considered unconstitutional in Uganda as all detainees have a right to Counsel and with immediate effect.

Regardless of the allegations, it is clear that Yoweri Museveni is clinging to his power, fearful of Wine’s popularity among the people.  Museveni has been in office for over 30 years, and well known for his violent suppression of all and any opposition through the decades. Museveni even spear-headed the the legislation that eliminated the raise the age-cap for a president, so that Museveni would not age out under the law.

While authorities have said the restrictions are necessary to curb the spread of Covid-19, opposition members say that they are an excuse to curb campaigning and intimidate opposition supporters before the upcoming January election.
Following news of Wine’s arrest, protesters took to the streets of Kampala, clashing with police and military who responded with tear gas. At least three people have died, and at least 34 were injured, Reuters reported, citing Ugandan police and the Red Cross. Another presidential candidate, Mugisha Muntu, announced that he would pause his campaign until Wine’s release.

I had the great privilege of meeting Bobi Wine in the Bay Area over a year ago. His charisma and pro-human rights stance would clearly be an attractive alternative to the current despot, who has grown wealth, together with corrupt Parliamentarians at the expense of the people of Uganda.The popular;ace see much promise in Wine.

Uganda is a constitutional republic led since 1986 by President Yoweri Museveni of the National Resistance Movement (NRM) party. In 2016 voters re-elected Museveni to a fifth five-year term and returned an NRM majority to the unicameral parliament. Allegations of disenfranchisement and voter intimidation, harassment of the opposition, closure of social media websites, and lack of transparency and independence in the Electoral Commission (EC), marred the elections that also fell short of international standards. The periods before, during, and after the elections were marked by a closing of political space, intimidation of journalists, and widespread use of torture by the security agencies. The national police maintain internal security. While the army is responsible for external security, the president detailed army officials to leadership roles within the police.

“The government was also responsible for harsh and life-threatening prison conditions; detainment of political prisoners; arbitrary or unlawful interference with privacy; lack of independence of the judiciary; the worst forms of restrictions on free expression, the press, and the internet, including violence, threats of violence, and unjustified arrests or prosecutions of journalists, censorship, and site blocking; substantial interference with the rights of peaceful assembly and freedom of association; restrictions on political participation; significant acts of corruption; crimes involving violence or threats of violence targeting lesbian, gay, bisexual, transgender, or intersex persons (LGBTI); and the existence of laws criminalizing consensual same-sex sexual conduct between adults. The government was reluctant to investigate, prosecute, or punish officials who committed human rights abuses, whether in the security services or elsewhere in government, and impunity was a problem.” (HERE https://www.state.gov/reports/2019-country-reports-on-human-rights-practices/uganda/)

As for political opposition, at African Human Rights Coalition, I have the names of several politicians, would be politicians, supporters and journalists, together with evidence of intimidations, poisonings, torture, arbitrary arrests, denial of right to counsel and detention without trial. Although the law prohibits arbitrary arrest and detention, security forces often arbitrarily arrested and detained persons, especially opposition leaders, politicians, activists, demonstrators, and journalists. The law provides for the right of persons to challenge the lawfulness of their arrest or detention in court, but this mechanism is seldom employed and rarely successful. African Human Rights Coalition has provided Country Conditions testimony for asylum seekers in the USA courts who have escaped the [Museveni persecution.

As for LGBTQI individuals, the list of persecution and discrimination is huge – and many have fled to neighboring countries to escape, not only the anti-homosexuality laws, but also the violence, rape, mob, familial and police vengeance, as well as reparative therapy type torture inflicted by Christian religious churches.The most recent of my reporting on this can be found here.

In August 2019, Kyagulanyi (Wine) announced that his supporter, fellow musician Michael Kalinda also known as Zigy Wyne, died at Mulago Hospital due to injuries sustained from severe torture. Kyagulanyi said that Kalinda went missing on July 21 after receiving multiple messages warning him “to be careful.” Unidentified individuals dropped Kalinda’s body at the hospital with an eye plucked out, two fingers cut off, and with burns on his torso. According to the Uganda Police Force (UPF), a hospital autopsy concluded that Kalinda succumbed to brain injuries caused by “blunt force trauma to the head.” The report added, “Kalinda’s right hand had cuts on two fingers, classified as defense injuries arising out of a struggle.” On August 5, the UPF concluded “the injuries point to a straightforward case of murder.” On August 6, however, the UPF reversed its initial finding and said that further investigations had revealed that Kalinda sustained his injuries in a motorcycle accident and closed all investigations into murder. Wine refuted the UPF account and said he would continue to assert that the state murdered Kalinda unless the UPF presented evidence to show Kalinda died in an accident. At year’s end the UPF had not presented any evidence of the incident.

“Authorities detained numerous opposition politicians and activists on politically motivated grounds. Authorities released many without charge but charged others with crimes including treason, annoying the president, cyber-harassment, inciting violence, holding illegal meetings, and abuse of office. No reliable statistics on the total number of political detainees or prisoners were available.

On April 29, the UPF arrested Kyagulanyi on charges of holding an illegal assembly in relation to a 2018 protest he held in Kampala against a proposed tax. The court remanded Kyagulanyi later that day until May 2, when it released him on bail upon condition that he not participate in “unlawful assemblies.” The trial continued at year’s end.

On August 2, a court sentenced dissident Stella Nyanzi (A University professor)  to 18 months in prison for cyber-harassment of the president (see sections 1.c. and 2.a). On August 15, Nyanzi and the state filed counterappeals, and on September 25, the court attempted to hear the proceedings in the judge’s chambers, in an effort to prevent public viewing of the procedures. Nyanzi’s attorney’s objection to the private hearing led the judge to defer the matter to the court’s administrative head, who issued no ruling by year’s end.

The state on August 6 amended the charge sheet in Kyagulanyi and his fellow politicians’ 2018 treason trial to add five new charges, including annoying the president, inciting violence, and disobeying lawful orders. The trial continued at year’s end. Three years after the 2016 raid on the Rwenzururu kingdom, the High Court still had not set a trial date for the Rwenzururu king, Charles Wesley Mumbere, and his bodyguards whom the state arrested and charged with murder, terrorism, and treason after a raid on the king’s palace in Kasese. At year’s end the state continued to hold the bodyguards on remand at Luzira prison and to limit the king’s movements to the Kampala, Wakiso, and Jinja districts. The court did grant the king permission to seek healthcare abroad but denied his request to travel to the Kasese area. On July 24, local media reported two bodyguards died in detention at Kirinya and Luzira prisons.”

This, and much more, has all led to today’s arrest.

The question is what now? What part should the world play in holding other State despots accountable for such serious human rights abuses? For 4 years the United States, regardless of these annual reports, continues to harbor and prop up dictators such as Museveni. Even President Barack Obama allowed Museveni to visit the White House for an African States event. But it is now time to call out dictators. We must stand for free and fair elections. And its time to take a hard line. Hard to set an example when we are failing too!

Indeed how do we call it out during a Trump administration – in the midst of his own despotic behavior-  and America’s tolerance for it, or through the Republican Senate majority that supports Trump’s despotic defecation on democracy!

However we are now poised for change as Joe Biden will become President of the United States in January 2020, and we will be calling on him to sanction human rights abuses. How can America ever think it will stand tall again, in the world, after the Trump abuses, unless we stand by our true human rights values. At this point the post Trump remedial work renders respect for our own human rights a mere benchmark!  First we must apply them to ourselves and then we can hold others accountable.

It is my hope that Bobi Wine survives this arrest- and I take my hat off to him for his unwavering courage. When we met, I was made aware that he was acutely aware of the dangers he faced in opposing Museveni. He remained committed to the people of Uganda and determined. I hope he rises – and is not martyred.

UPDATED: Arrests have sparked violence and rioting. No doubt the Museveni Government will launch its strongest quelling machines! I fear for the people.