UNSETTLED follows LGBTQ refugees and asylum seekers from Africa and the Middle East as they flee persecution to seek safety in the U.S. A documentary film by Tom Shepard

Open Door Productions LLC presents the broadcast premiere of  UNSETTLED: Seeking Refuge in America, a documentary revealing the untold stories of LGBTQ refugees and asylum-seekers, produced and directed by Tom Shepard and co-produced by Jen Gilomen.

UNSETTLED had its World Premiere at the San Francisco International Film Festival and is the winner of the Best Documentary Feature Film at 2019 Outfest (playing at 55 festivals worldwide and winning 14 other top awards).  UNSETTLED will lead Doc World’s new season which broadcasts on public media’s WORLD Channel on June 28 and will be available for streaming on WorldChannel.org through July 12.

As the current leadership in America continues to demonize immigrants and drastically restrict the flow of refugees and asylum seekers into the U.S., UNSETTLED brings to life the names, faces, and tumultuous backstories of LGBTQ individuals forced to flee intense persecution in their home countries:

Cheyenne and Mari , a lesbian couple from Angola who, having faced brutal harassment from family and neighbors, seek uncertain asylum through the American immigration courts while pursuing their dreams of becoming musicians.  Junior, a gender non-conforming gay man from the Democratic Republic of the Congo struggles intensely to find basic housing and livelihood while exploring a more fluid gender identity. Subhi, a gay Syrian refugee who, having survived multiple death threats from Islamic terrorists, beatings by a violent and homophobic father, and a nation devastated by years of war, finds his voice as a leader for refugee rights in the U.S. Along the way he meets then Ambassador Samantha Power and is invited to be the first gay man ever to testify before the U.N. Security Council.

As the U.S. has increasingly closed its borders, these vulnerable refugees struggle to find safety and new homes on our shores. Landing in gay-friendly San Francisco and girded with new hope.

ALSO LISTEN – LEONARD LOPATE at LARGE:
LIVE Radio interview this Friday, June 26 at 10am PST – 11am. NEW YORK (1.00 EST) – Leonard Lopate Show at WBAI Radio where Tom Shepard, Melanie Nathan and Cheyenne will be on for the full hour answering questions about refugees and asylum seekers and the film.

Leonard Lopate, the Peabody and James Beard Award-winning broadcaster, is back on WBAI 99.5fm where he began his broadcasting career, weekdays 1-2pm at 99.5fm or streaming at WBAI.org HERE 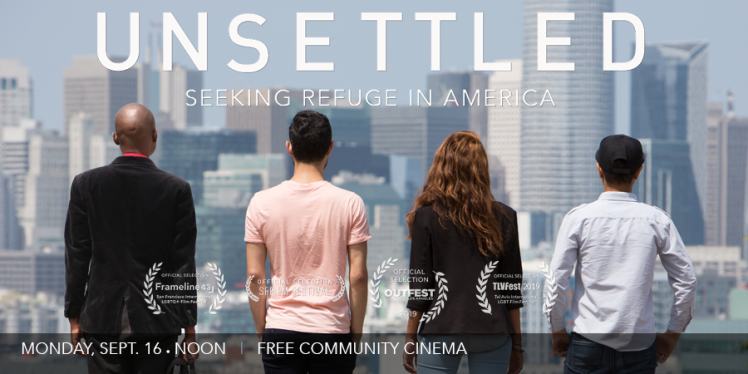