RefCEA Responds to Cessation of Funding with a call  for a Community Planning Session: First Reported at AFRICAN HRC HERE.

Tuesday 10 March 2020, NAIROBI, KENYA – In recent weeks, HIAS (the Refugee Trust of Kenya) announced the cessation of funding for urban refugees located in greater Nairobi. These LGBTQI refugees were transplanted from the refugee camp in Kakuma in late 2018 for reasons concerning security and safety due to the prevalance of homophobic attacks within camp. From the time of relocation to urban Nairobi, HIAS has provided a monthly assistance stipend to those refugees given their lack of (and inability to obtain) working papers rendering them incapable of earning a living through traditional employment.

These funds are used by recipients to pay for food, sundries, hospital transport for those who are ill, phone service, and rent. Following the cessation of funding there is often a spike in evictions and/or an increased risk of criminal prosecution for refugees who are unable to pay rent. Recipients of the stipends were notified by HIAS that the financial assistance would end some time in the coming weeks. Representatives from HIAS have not yet responded to a request for further information at the time of this release.
In response to the potential crisis the discontinuance could cause, RefCEA announces an invitation to concerned parties to come together and work to find a solution to the inevitable impoverishment of these LGBTQI refugees who have no legal means to earn a living. RefCEA has invited CBO leaders of local LGBTQI refugee organizations, Kenyan partners including UHAI Kenya and RAS, and representatives from the UNHCR to join the RefCEA Secretariat for a three-day planning workshop. The goal of the workshop is to bring the community and concerned parties together to work toward a solution of long-term, sustainable income including (but not limited to) funding for business initiatives, grants for long term solutions, and ongoing replacement funding for those incapable of working. Planning will also occur for the recurrence of (and creation of new) food relief and livelihood programs run by RefCEA in the past.
The Coalition is aware of planned demonstrations in response to the sudden cutting off of funding and cash grants to LGBTQI refugees who had been receiving assistance. The Secretariat puts forth the following statement in response to those planned protests:

While we agree that demonstrations and protests might be justifiable, we find that such events may not hold the solution to our plights in the community.
It is our fear that these demonstrations may do more harm than good to the LGBTQI community in the urban areas and to those seeking asylum in Kenya, but we do not support the condemnation of those protesting or of the outside advocates of those demonstrations.
While we support anyone’s right to public protest, rather than participate, we, the Coalition, would prefer to address these challenges by collaborating with UHAI Kenya, Community Based Organizations, and other LGBTQI stakeholder organizations in Kenya. The cessation of funding with an absence of long-term sustainable planning to those members of our community is, indeed, a crisis, but we see this as an opportunity to work together to find actionable responses that provide long-term solutions that will hopefully create a model for the future of LGBTQI refugees in Kenya.
The upcoming workshop and solution-seeking collaborative event will take place in late March or early April. Details, including dates, times, and participating organizations will be announced soon.

AFRICAN HRC issues an advisory this month noting the particular dangers to LGBTQI refugees should they chose to stage demonstrations: HERE. 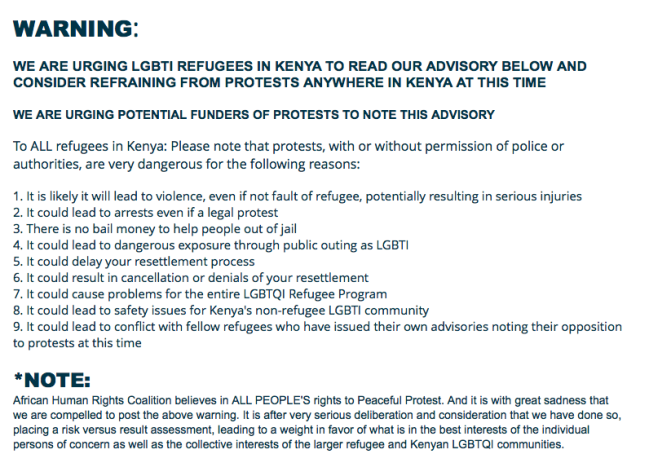