Washington, DC – Earlier today, Temporary Protected Status (TPS) holders and immigration experts gathered to call on the House of Representatives to investigate the Trump administration’s termination of TPS in coordination with his 2020 re-election campaign. 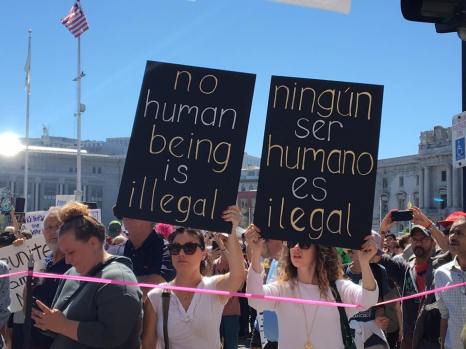 50+ local and national groups across the country sent a letter to Chairman Eliot Engel (NY-16) and Subcommittee Chairman Joaquin Castro (TX-20) today asking the House Foreign Affairs Committee to investigate the findings released in a report by ranking Senator Bob Menendez (D-NY) which found the Trump administration had political motivations for terminating TPS.

>The letter to the HFAC comes in the wake of a report from Human Rights Watch relaying that 138 people have died since being deported back to El Salvador, a TPS-designated country. Terminating TPS reveals the unlawful extremes this administration will stoop to and begs the question: why did Trump put his 2020 reelection campaign ahead of hundreds of thousands of lives?

“I am a TPS recipient from El Salvador and member of the International Union of Painters and Allied Trades, District Council 51, which is part of Working Families United. I came to this country 20 years ago and since then I have built a good life for my family; my husband and 2 sons. I left El Salvador fleeing violence and in search of better opportunities for a better life. All my life I have worked hard and fought to create a life here, but right now I and 300,000 other TPS recipients are living in limbo while our futures are decided by the courts. This reality has made everyday things more difficult from trying to buy a house, getting a license, or keeping jobs secure. The United States is the only country my children know as their home and they are worried that we will be taken from our community because of the president’s decision to cancel TPS.”

“Deported TPS beneficiaries would be returning to an extremely unstable security situation in both El Salvador and Honduras,”said Yanira Arias, TPS holder from El Salvador and National Campaigns Manager at Alianza Americas. “We have seen the horrifying reports from Human Rights Watch on deaths of returnees. This would be just the tip of the iceberg if the US tries to return more than 175,000 people TPS holders, many of whom have US citizen children who would either have to remain alone in the United States or return with their families. This could affect more than 200,000 US citizen children.”

“Time and again over the past three years, members of this administration—like the president himself—have put personal and political interests ahead of the national interest. The minority staff report released by the Senate Foreign Relations Committee identifies a particularly egregious instance in which Trump administration appointees ignored the sound advice of senior officials throughout the State Department to illegally inject re-election considerations into the TPS termination decision. Members of Congress were right to ask the State Department Office of Inspector General to investigate the politicization of this determination, but the House Foreign Affairs Committee should use the power of the gavel to investigate this abuse themselves.”

“Today we are releasing a letter to Chairman Eliot Engel and Subcommittee Chairman Joaquin Castro asking them for an investigation into how Temporary Protected Status was ended, signed by more than 50 organizations across the country,” said Douglas Rivlin, Director of Communications at America’s Voice. “In November, Senator Menendez and the minority staff of the Senate Foreign Affairs Committee released a report that found the Trump administration went against the advice of experts in ending TPS and found that Trump political appointees raised questions about how and when it would end so as to benefit the President’s reelection strategy – mixing politics with the decision making process. Ending TPS is a matter of life and death, a matter of great urgency to American communities and to US citizens, especially for those who live in households headed by TPS holders and face the prospect of being forced back to dangerous conditions. The hundreds of thousands of TPS holders, their families and the rest of us deserve a thorough investigation and that’s why we are calling on the House Foreign Affairs Committee to investigate these findings.”