A San Antonio Family Law attorney, Allan Manka, was given plea deal tantamount to a slap on the wrist for the egregious and unsolicited ‘touching’ of a opposing female attorney during their Courthouse negotiations. The plea deal by the Wilson County Attorney’s Office resulted in no conviction if he doesn’t do it again within the next 90 days….

Following the family court hearing, Manka inappropriately slid his hand around the waist of an opposing female attorney at the Courthouse in full view of security cameras. Surprised by his actions, the attorney told him she couldn’t believe he did that in court and she reports that he laughed about it. “We proceeded to continue with negotiations with our respective clients. Shortly thereafter, at the conclusion of the negotiations, I extended my hand to Manka in a departing gesture. Instead of taking my hand, he reached behind my back and grabbed my buttocks.”

In an ABA Journal article the attorney notes: “He gets a handful of my rear end and squeezed. It wasn’t like a pat: It was a grab and squeeze.”

Both unwanted assaults by Manka were captured by cameras at the Wilson County Courthouse and were available to the prosecuting attorneys.

Manka, will have a clean record if he stays out of trouble for ninety days and doesn’t continue to foster his reputation of unwanted touches, grabbing and making sexual remarks to other female attorneys. NINETY DAYS?

The assaulted attorney, reports in her own words:

Assistant County Prosecutor Christopher Rodriguez in Floresville, Texas, thought it best to offer a plea agreement to Manka, agreeing to a $400 fine on a Class C Misdemeanor charge and contribute $100 to a women’s shelter. In exchange, rather than prosecuting the case, Assistant County Attorney Christopher Rodriguez offered deferred adjudication on the charge of Manka grabbing my butt in the lobby of the Wilson County District Courthouse following a family court hearing.

The following day, I contacted the Wilson County Sheriffs Department to file a complaint as well as the Wilson County Attorney’s Office. Despite having committed two unwanted assaults, Manka was issued only one citation for the Class C Misdemeanor offense. Repeated efforts were made to both departments to have a second citation issued to no avail. Both departments kept passing the responsibility of issuing the citation as the responsibility of the other.

It was then learned that Manka had a reputation for and long committed similar actions with other females throughout the Bexar County area courthouses. Other attorneys reached out to me and informed me that they had been subjected to unwanted touches and sexual verbal remarks by Manka that made them very uncomfortable. All the information received was offered to the Wilson County Sheriffs Office as well as the County Prosecutor but no interest was shown in following up on the information provided.

On August 14, 2019, a pre-trial hearing was scheduled before Wilson County Justice of the Peace Villareal at 9 am. Upon arrival, following a four-hour drive to be present at the hearing, Assistant County Attorney Christopher Rodriguez informed me that there would be no hearing as Manka had accepted his offer of deferred adjudication with the $400 fine and $100 contribution. Prosecutor Rodriguez stated the agreement had been reached two days prior and had been finalized the previous day. Despite the fact that Attorney Rodriguez had been made aware that I would be driving the long distance to attend the hearing, he made no effort to check with me to see if I was in agreement with his offer or to subsequently notify me there would be no hearing. Furthermore, he also admitted he had not read the affidavits that had been submitted nor viewed the videotape obtained from the courthouse showing Manka committing the assaults. His stated justification for making the offer was that Manka was a first time offender, they didn’t want a conviction on his record and that he probably did not know that what he did was wrong or offensive. When I asked Rodriguez why he couldn’t bother himself with giving me the courtesy of notifying me the pre-trial hearing was canceled, he mocked me by stating, “well, weren’t you supposed to have a bunch of women here and the media? There’s no one here.” I was so livid I did not get the chance to tell him that the women that offered to show up were going to attend the first hearing that was canceled. Essentially, his remarks felt like a slap in my face.

I then proceeded to meet with Justice of the Peace Villareal, who stated he had very little information on the case and didn’t know if it was already completed but agreed to not sign off on it when it got to him until he reviewed the facts completely. 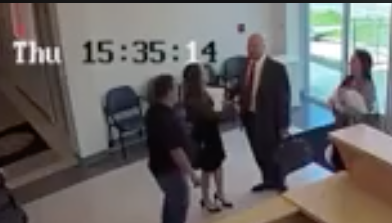 The video was then played for Justice of the Peace Villareal, who had not been made aware of any of the evidence. However, when spoken to following a meeting with County Prosecutor Tom Caldwell, Justice of the Peace Villareal admitted that the agreement had been reached two days prior and signed but stated it was not yet final. His recollection and information were conflicting and at one point stated that perhaps it could be taken to a higher court.

County Prosecutor, Tom Caldwell, informed me that he understood I was not satisfied with how the case had been handled but informed me that he gave his assistant attorneys the latitude they needed to dispose of their cases as they saw fit. He further stated that the result would have been the same if it had gone to trial and been proven successfully, i.e. that he would be found guilty and the maximum fine would have been $400. Although he stated he had not been made aware of the offer by his assistant attorney, he then expressed surprise that the offer had included deferred adjudication. He informed me that he would not approve the agreement and would instruct his assistant attorney to pull the pleas offer immediately following our meeting, although at one point he stated that if it was a done deal, there was nothing that could be done. He also stated that they could not instruct the Sheriff Department what citations to issue, even if two acts had occurred and it was up to the law enforcement authorities to do so.

Ironically, as I waited in the County Prosecutor’s waiting room, a female attorney I shared my story with stated that Manka’s actions are well known throughout and that she herself had twice been assaulted by other attorneys but never filed a complaint.

After meeting with County Attorney Tom Caldwell I then met with Wilson County Deputy Chief Deagan, who informed me they had not found that Manka’s grabbing me around my waist constituted assault but stated they deferred to the County Attorney’s office to determine what charges or citations to issue, a contradiction to what was relayed by the Country Attorney’s office.

Besides issuance of a citation by the Wilson County Sheriffs Department, no effort was made by them, the County Attorney and his staff or the Justice of the Peace to follow up on the actions of Allan Manka. I and others affected by his known behavior as well as actions and the entire community deserve better!

Today I followed up with the Justice of the Peace Court to check the status of the case. I was informed that it was closed and the plea was modified yesterday. I requested a copy of the court documents and have yet to receive any copies.

Per Assistant County Attorney Christoper Rodriguez’s LinkedIn page, he is also an adjunct professor at St. Mary’s University in San Antonio, Texas and is the founder and sole proprietor of The CPR Law Firm in Floresville, Texas.

This type of failed justice only serves to exacerbate a perception that such touching is not in fact an egregious sexual assault. However in the shoes of women, this is a sexual assault. Imagine if this straight male attorney had a history of grabbing a fellow male attorneys around the waist and on the buttocks. The mere fact that he has no reputation for touching anyone other than women, is in and of itself indicative of the sexual nature of these assaults. Furthermore, it seems as if the Court is giving Manka a license to pursue sexual assault once the 90 days are up.

Take note predators – this brigade is watching and noting… and more of our courageous community will come forward to lodge complaints.. regardless that male-centric-justice thinks this petty.  While perpetrators laugh off that which hurts and offends their colleagues, I have no doubt, at the very least, karma will deliver its due!

Women watch out for Family Law Attorney Allan Manka – if he does THIS under the ever watchful eye of Courthouse security cams, imagine what he is capable of in the privacy of his office or home!