Donald Trump is 100% responsible for the El Paso, Texas and Dayton, Ohio massacres which caused 29 brutal murders and over 40 injuries, in a 14 hour window, with shooting that totaled less than 6 minutes in El Paso (20 dead) and 30 seconds (9 dead) in Dayton:

We can attribute the slaughter to the following realization:

You may ask why young white men do this AND why upsurge in our domestic terrorism attacks so frequent and similar:

Its multifaceted- AND you will note if you take just one of these elements out of the equation it could change. But helming it all is the ultimate trigger – #1 – without which we are left wondering- would this be happening at all – least of all at this current rate with such stated motives ….

After El Paso, We Can No Longer Ignore Trump’s Role in Inspiring Mass Shootings:

Sound familiar? The president of the United States — …  — has repeatedly referred to an “invasion” at the southern border; condemned Mexican immigrants as “rapists” and Syrian refugees as “snakes”; accused his critics of treason on at least two dozen occasions; and told four elected women of color to “go back” to the “crime infested places from which they came.”

That there could be a link between the attacker and the president should come as no surprise. But it might. Over the past four years, both mainstream media organizations and leading Democrats have failed to draw a clear line between Trump’s racist rhetoric and the steadily multiplying acts of domestic terror across the United States. (And there are many more making similar assertions)

Some of us tried to sound the alarm — but to no avail – you will note my BLOG after the  attack at the Tree of Life Synagogue, Pittsburgh, Pennsylvania:

The shooter tweets speak for themselves and provide his clear path to the doors of Tree Of Life Synagogue in Pittsburgh, Pennsylvania. And he was as good as sent there by Trump.  He is an anti-Semitic American grown terrorist, a product of the Trump era anti-refugee dicta that leads many in America to think that refugees are invaders intent on crime, mayhem and slaughter when they reach America. 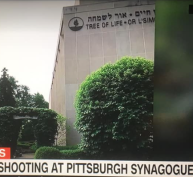 This was the perfect storm for the likes of Robert Bowers, whose target was heralded by The Hebrew Immigrant Aid Society (HIAS) drive with synagogues to support refugees, “The national Refugee Shabbat.”

Just this week, after two years of continued refugee and asylum seeker bashing,  Trump ordered the Military to the border to try and threaten the latest caravan of refugees headed this way. In doing so he lied to the American people, instilling fear, that among these refugees were “ terrorists from Middle Eastern countries.”  What a coincidence – Robert Bowers, whether a Trump supporter or not, is threatened. He believes that he will be slaughtered by “the stranger among us”, who HIAS is established to support! And so this known anti-semite believes that the Jews are helping and harboring those sent to slaughter him.   Clearly evidenced by his 2 most recent Tweets, found in web archives after his account went down.

And then it will take an extremely aggressive anti-White Supremacist progressive president and administration to start unravelling the harm – through the eradication of divisiveness by unifying the country, remedies for racism, remedies for mental health resources, banning of assault rifles, gun checks, federal domestic terror laws, immigration reform, and proactive investigations that deter these sick white supremacist killers.

The bottom line is that Trump is legitimating White Supremacy ideology, thus motivating the mayhem and murder. No amount of Tweets or White House lawn or Oval Office pretense, that he is abhorred by the massacres, can deny or eradicate his megaphone call from the White House and Rally Podiums. AND This is what they hear:  “This country belongs to us White People. Any one else is an invader. Including Hispanics, refugees, and Muslims. Its all the fault of the Jews. Its self defense off you go out there and  kill those motherfucking immigrants and invaders- if you allow the invasion -then they are coming to get you…”   Domestic Terrorist 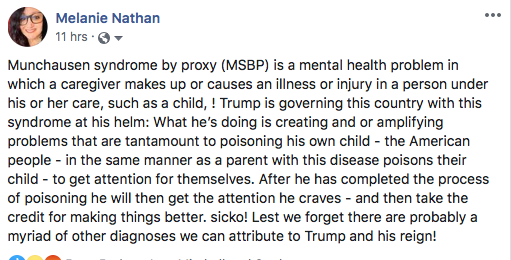 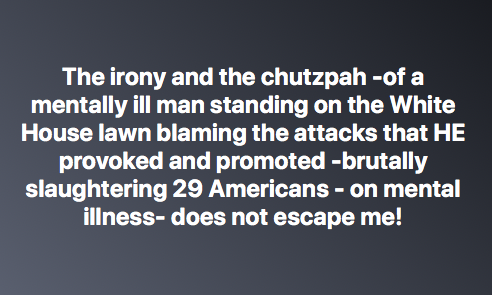