Antisemitism and Refugees and Jews helping refugees mixed with trump Anti Refugee dicta and lies is the perfect storm!

Today the Pittsburgh Jewish community was attacked by a terrorist, killing at least 4 people and possible as many as 8, with reports of numerous injuries. While some may suggest we wait to get more information from authorities, a small amount of internet research provides the motive attributable to the shooter, who was apprehended by police after he barricaded himself in the synagogue.

Robert Bowers’ tweets speak for themselves and provide his clear path to the doors of Tree Of Life Synagogue in Pittsburgh, Pennsylvania. And he was as good as sent there by Trump.  He is an anti-Semitic American grown terrorist, a product of the Trump era anti-refugee dicta that leads many in America to think that refugees are invaders intent on crime, mayhem and slaughter when they reach America.

This was the perfect storm for the likes of Robert Bowers, whose target was heralded by The Hebrew Immigrant Aid Society (HIAS) drive with synagogues to support refugees, “The national Refugee Shabbat.”

Just this week, after two years of continued refugee and asylum seeker bashing,  Trump ordered the Military to the border to try and threaten the latest caravan of refugees headed this way. In doing so he lied to the American people, instilling fear, that among these refugees were “ terrorists from Middle Eastern countries.”  What a coincidence – Robert Bowers, whether a Trump supporter or not, is threatened. He believes that he will be slaughtered by “the stranger among us”, who HIAS is established to support! And so this known anti-semite believes that the Jews are helping and harboring those sent to slaughter him.   Clearly evidenced by his 2 most recent Tweets, found in web archives after his account went down.

Trump is to blame. We have anti-Semites all around us. They are like bombs waiting to explode. All they need is someone to press that button.   Trump has spent two years preparing the push and just this week placed his finger on the button and pushed it down!

I do not want to hear Trump’s calls for unity. I do not want to hear from anyone who has propped this man up suggesting we pray for victims. I want something different to happen. I want to hear politicians lay blame where blame is due. Squarely in the seat of our leadership.  This discussion today is not merely one about guns and control or mental health. It is one about a man who has had the Oval Office as his platform, the loudest megaphone in the land – to stir up hate, to provide motive and hence to push that button. 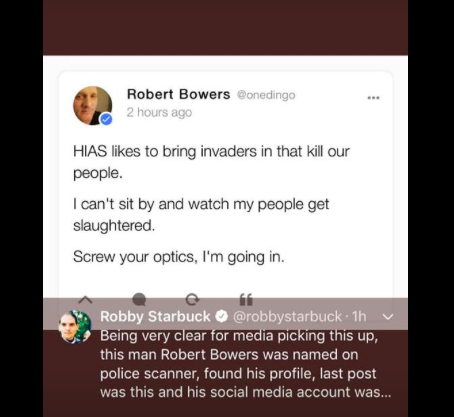