A solo play about saving one’s own life: “The problem is women. They’re bloody everywhere.” That’s what Fiona Goodwin – a very British, hilariously funny, middle-aged lesbian – has discovered and recounts in her one-hour, one-woman play.

Fiona’s shows will be on in Edinburgh and London during July: Dates and ticket links here. https://www.unrestrictedview.co.uk/edinburgh-preview-a-very-british-lesbian/ 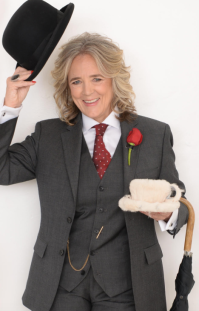 Fiona Goodwin, the UK born, Los Angeles based stand-up comic, who has appeared at The Comedy Store, Flappers, The Colony Theatre, and The Electric Lodge is making her debut in the Bay Area. Coming to Marin June 15, at a venue that local LGBTQI community have come to adore, is the modern-day Gentleman Jack in the form of a “Very British Lesbian.”

Noting exciting entertainment for lesbians and their straight allies is a rarity in Marin, this refreshingly ingenious show, laced in pathos, assures all a memorable experience.

The former secondary school teacher turned therapist turned stand-up comic and performer did absolutely everything for decades to try to suppress her queerness. You name it, she’s done it and more, absolutely everything in her power to run, hide, and keep the secrecy of her forbidden sexuality.

She lived with nuns in Italy, was a missionary in Honduras, leapt into ‘Born Again Christianity’ with a smattering of dramatic exorcisms, all leading to Los Angeles where she finally felt licensed to come out in her late forties.

The performance, directed by Wendy Hammers, has been adapted for this fortuitous debut at the Marin venue Mary’s Hide and Sleep.  Of “Futon Mary” fame, little did Mary Hughes realize that her decades old and newly branded store would so aptly serve to metaphor the story that will unfold on June 15th. It is couched in hide and sleep!

This quintessentially English show, acclaimed by those who have attended its full one woman play format in Edinburgh, London, and Los Angeles is laugh out loud funny. As Robin Tyler, the first ‘out’ LGBTQI comic, wrote in the Los Angeles Lesbian News:

What makes a comedy genius?  There have been thousands of performers who know the art of comedy, be it stand up, improve, theatre or mime. But there are very few performers who measure up to Charlie Chaplin, Lily Tomlin, Richard Pryor or the handful of others considered to be a ‘comic genius.’ Few have the ability to combine comedy and pathos, to walk that fine line between laughter and tears.  I saw such a rare gifted performer last week in a sold-out theatre performance in Santa Monica, CA, Fiona Goodwin is ‘a very British Lesbian.’  For one hour, she took us through a journey of the struggle between her religious upbringing and her attraction toward women.  She delivers her story so brilliantly, that the audience goes through her life’s ups and downs, laughing all the way.  By the end, I wanted to jump up on stage and hug her, for having gone through so much to just ‘come out,’ but the standing ovation lasted too long.  This woman, who grew up in the very proper British countryside, has created a phenomenal show that is not to be missed.

“Fiona delivers her soul-baring tale with such comic dexterity and deftness, that she gifts the audience with something quite precious and contradictory; the power to see each painful step in her journey with compassion and empathy, giving sweet permission to have a hearty laugh at it all.” – Russell Carpenter, Oscar-Winning Cinematographer,Titanic.

Fiona’s shows will be on in Edinburgh and London during July: Dates and ticket links here. https://www.unrestrictedview.co.uk/edinburgh-preview-a-very-british-lesbian/