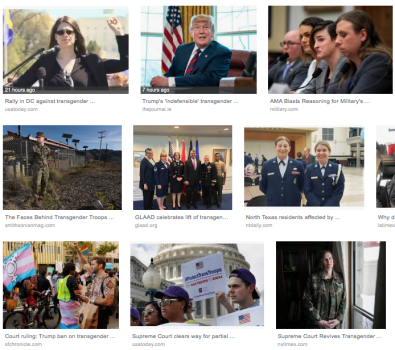 The President of the United States, Donald J. Trump, has spewed failed Republican leadership with antics and political policies that are embroiled in revenge against the Democrats. Is that the way a good leader runs a country and expresses himself globally? In playing his revenge game Trump has worked avidly to rob children of family, trans heroes of their jobs, dignity and desire to serve patriotically, immigrants and asylum seekers their basic rights, people of their right to healthcare, and much more, all the while shirking his Constitutional Oath. He has now admitted to the motive for his fostering of hate mongering, and served and stirred the phobias that generates hate, –  from anti-Semitism, to xenophobia, to racism, to trans and homophobia, to Islamaphobia….. this is a very dangerous state of affairs. Any Republican that remains silent or vocally supportive, is complicit in the motive and the result.

Today Trump’s ban on transgender service members goes into effect. Transgender service members, who are putting their lives on the line for this country, are being told that they are unworthy of service, by a coward who lied about having bone spurs to avoid service.  This policy is just one of more than 100 attacks the Trump Administration has made on LGBTQ people since they took office. Today, let’s stand with trans people to let them know that they have the love and support of all LGBTQ people and allies.

Today,the Trump administration reinstated a ban on transgender Americans after three years of open service which the service chiefs had considered a success. The policy was implemented over the objections of the nation’s top medical experts who decried the Pentagon’s abuse of science and its reference to gender transition as a “deficiency.” Despite Pentagon claims to the contrary, the policy functions as an outright ban on transgender Americans, as this Palm Center memo and this op-ed, published today in Politico, make clear.

Palm Center Director Aaron Belkin made the following statement: “In implementing ‘don’t ask, don’t tell’ for transgender troops today, the Trump administration has put petty politics above military readiness, and personal prejudice above the genuine judgment of military leaders, who have made clear that inclusive service has succeeded for the last three years. Today our nation lurches backwards in a disgraceful retreat from the arc of our civil rights history. Our hearts break for the courageous transgender patriots who want nothing more than to defend their country, and we pledge not to rest until inclusive policy is restored. The transgender ban won’t stand for long.”

2 thoughts on “Trump’s Transgender Ban is Revenge Politics at its worst – a host of hate in leadership!”